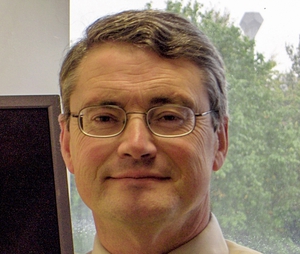 When income tax was extended to Ireland for the first time in 1853, many saw it as the most powerful nation in the world in the mid-nineteenth century asking the Irish to pay for their starvation. Peter Clarke explains what happened

In his budget speech to the House of Commons on 18 April 1853,  Chancellor of the Exchequer William Gladstone proposed, not only to renew the income tax system in Britain for a seven-year period, but also to extend it to Ireland for the first time. As UCD Economics Professor George O'Brien explained in the (Irish) Senate on 3rd December 1952:

"… large sums advanced for relief of distress after the Famine had been irrecoverable, owing to the impoverished condition of the country. Income-tax was imposed with the object of recouping the Exchequer for part of the loans and grants to Ireland which had become irrecoverable."

Income Tax was not a new phenomenon in Britain. It had been introduced as a temporary measure in April 1799 in order to help finance the Napoleonic war, and was abolished after Napoleon’s defeat at Waterloo in 1815.

After a short reprieve, Sir Robert Peel’s Government reintroduced income tax in Britain in 1842 not as a 'war tax’ but, according to the first Report of the Commissioners of Inland Revenue:

"… for the purposes of repairing the deficiency which then occurred in the revenue to meet the expenditure of the country, and to enable the Government to make some reforms, with the view of improving the commerce and manufactures of the Kingdom."

Income tax would be imposed in Ireland at a rate of 7d in the pound, or about 3% and, in exchange, the government would write off the Treasury loans extended to Ireland for Famine Relief measures in the late 1840s.

In the early 1800s several commissioned reports on Ireland prophesied disaster due to the Irish dependency on the potato, and the low standard of living of large swathes of its population. Before the Great Famine in the 1840s, an estimated one-third of the Irish population depended on potatoes for survival. In mid-October 1845, the disaster of potato blight was identified in Ireland.

Sir Robert Peel’s government authorised the establishment of a Relief Commission to oversee the various famine relief projects. Peel also organised the importation of Indian maize from North America and a public works programme provided cash employment for the destitute.

John Russell’s Whig government replaced the Tory administration in June 1846 and by the spring of 1847 the public works programme employed around 750,000 people.

The Temporary Relief Act of February 1847 saw the brief introduction of state-sponsored soup kitchens until the Poor Law Extension Act of June 1847 shifted the responsibility for the relief of the hungry poor on to the local rate payers and workhouses.

It is important to note that the enabling legislation for British relief expenditure provided that half of the funds would be in the form of (repayable) loans.  A post-Famine Report in 1852 provides an estimate of the Treasury outlay of £9.2 million for total Irish Famine relief. Of this total amount, £4.4 million (48%) was the amount owing (in 1852) and would have been repaid by an annual annuity of £245,061. 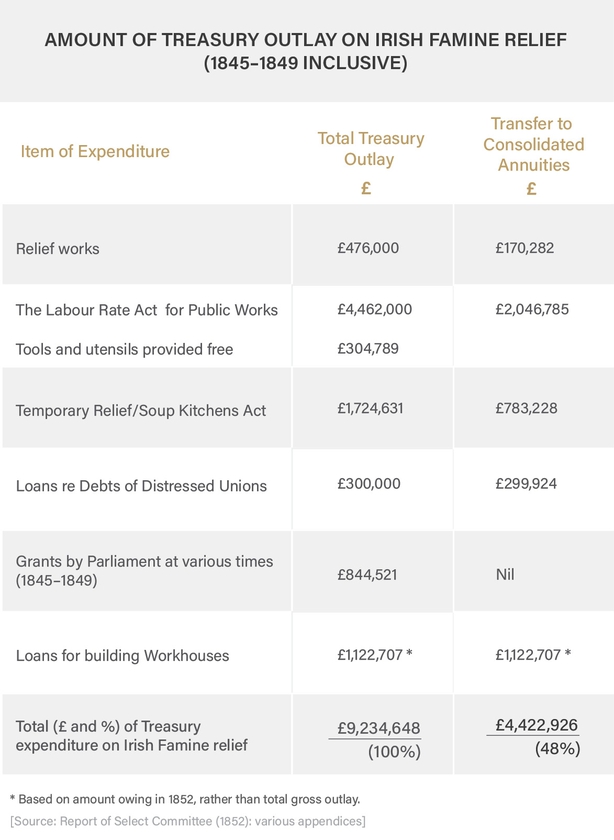 According to Gladstone’s estimates, Irish income tax would yield £460,000 annually, over the proposed seven-year duration of the legislation. This would amount to approximately £3.2 million in total. In the same budget, the duty on spirits was increased by 25 per cent because, according to Gladstone,'An Irishman should not be allowed to intoxicate himself more cheaply than an Englishman'

‘an Irishman should not be allowed to intoxicate himself more cheaply than an Englishman’.

This additional duty, which yielded approximately £1.4 million between 1853 and 1860, should also be taken into account when considering whether Gladstone’s proposals represented a sound financial arrangement for Ireland.

Effectively, the most powerful nation in the world in the mid-nineteenth century imposed an income tax on a haemorrhaging Irish population, which, according to the Financial Relations Commission in 1896, ‘was not justified’. On 9 January 1847, the Freeman’s Journal declared that the movement against the ‘inquisitorial and inequitable’ income tax had ‘become almost universal in Ireland’.

This amounted to a total collection in excess of £20 million over four decades – a great deal more than the sum of about £4.4 million which was written off in lieu of the imposition of income tax on Ireland in 1853.

Consequences of the introduction of income tax in Ireland

The imposition of income tax on Ireland in 1853 had  a number of consequences, the most immediate of which was the increasing demand for accountancy professionals to navigate the technical tax provisions in the new legislation.

The emerging accountancy profession in Ireland answered the advertisements in national newspapers for services such as the computation, preparation and submission of income tax to the authorities.

People’s perceptions about the moral legitimacy of British rule in Ireland were also affected by the introduction of income tax, which many saw as another example of British misrule. The 1853 legislation inflated a sense of economic injustice and contributed to the growth of Irish nationalism in the latter part of the nineteenth century.

The Irish War of Independence was followed by the creation of the Irish Free State in 1922. The Free State government adopted, with minor amendments, the British Income Tax Act of 1918, together with the British Finance Acts of 1919 to 1922 inclusive.

Thus, the Irish Free State of 1922 willingly began its fiscal life under income tax legislation imported from Britain, and which owed its imposition on Ireland to the Great Famine.

Charles Trevelyan, the Assistant Secretary to the Treasury during the Famine, was rather dismissive of Ireland in 1848, when he posed the rhetorical question: ‘But what hope is there for a nation which lives on potatoes’? His hope was that the Famine would provide an opportunity to reform Irish agriculture along capitalist lines.

The imposition of an income tax reflected a strongly held belief in Westminster and Whitehall that responsibility for the Famine ultimately lay with the Irish people and that Ireland in some way should be made repay the loans extended to her during the Famine years. For some commentators it looked for all intents and purposes as if the country was being made pay for the people’s starvation.

Peter Clarke, ACA, MA (Econ), PhD is Emeritus Professor at the Department of Accountancy, University College Dublin where he lectured various accounting courses. He has published several articles dealing with various aspects of accounting and taxation history in peer-reviewed and ...