Why did British governments fail so catastrophically to respond effectively to the Great Famine? Peter Gray on why the relief measures in Ireland were so ineffective.

Why did British governments fail so catastrophically to respond effectively to the Great Famine? They were confronted by an unprecedented combination of crises in 1845-50 – repeated failures of the subsistence potato crop, the wildly fluctuating availability and cost of alternative foodstuffs, and political instability and economic crisis in Britain and Europe.

Given the sheer scale of the disaster, the Victorian state found itself wanting. But governments also contributed to the mortality toll through a series of policy mistakes, resulting from both political calculation and adherence to ideologies that placed faith in liberal political economy and the reconstruction of Irish society ahead of humanitarianism, and which subordinated Irish to British national interests.

From Peel to Russell

The British government changed hands in June 1846 as Sir Robert Peel's Conservative ministry gave way to a minority Whig administration led by Lord John Russell. There were continuities between the administrations, but also some important differences.

Peel had extensive experience of governing Ireland and drew on precedents in responding to the first potato failure of autumn 1845. There was an element of pragmatism in his response. Inquiries into the scale and nature of the failure were carried out, although a 'scientific commission’ failed to establish the cause of or a remedy for the blight.

A Relief Commission under the head of the Commissariat (army supplies department) Sir Randolph Routh was instituted to co-ordinate measures. Legislation was passed to fund public relief works from state loans, to be carried out by the Irish Board of Works in collaboration with local authorities.

Grants were offered to stimulate the formation of district relief committees, comprised of landowners, clergy and other ‘notables’, to select labourers for the public works, raise charitable subscriptions, and distribute or sell subsidised food to those most in need.

However, Peel was also preoccupied with repealing the British corn laws, a policy which infuriated landowners but which he argued was essential to allow imports of grain, free of protective tariffs, at a time of hunger in Ireland.

As a stop-gap, he also approved the purchase of £100,000-worth of Indian corn (maize) from New York in early 1846, to be released from depots in Ireland when needed to keep food prices from escalating.

This interference with the market was meant to be strictly temporary, to stimulate a taste for a cheap alternative to the potato in Ireland that he intended private traders to take over once the corn laws had gone.

As free traders, both Peel and his successor Russell refused appeals to embargo food exports from Ireland, which were large in 1845 but smaller (if still significant) after the 1846 and subsequent harvests.

Reliance on food imports supplied by market forces became an official dogma, despite its patent failure to stop prices soaring to starvation levels in the winter of 1846-47.

Despite its limitations, Peel’s policy had been relatively successful in dealing with the partial potato failure of 1845-46. Few died that year. However, in Britain criticisms of ‘improvident’ Irish landlords and ‘idle’ peasants were widespread alongside accounts of abuse of the relief schemes.

The incoming Russell government was faced with a much larger potato failure in summer 1846, but also under political pressure to make relief less lenient. Charles Trevelyan, the senior administrator at the Treasury carried over from Peel’s administration, was now given a much freer hand in rewriting policy.

The Relief Commission was dissolved to allow more direct control from the Treasury, and the ‘Labour Rate Act’ passed, continuing public works but on much harsher terms. Projects were now to be of no economic value to landowners and wages were pegged below private levels and paid by ‘piece rates’, intended to stimulate work discipline but condemning the weak and elderly to hunger.

Desperation saw numbers on the works balloon to over 700,000 by March 1847, with between two and three million people dependent on their meagre earnings. The public works became a shambolic fiasco.

The Board of Works could not provide sufficient organisation and cash for wages ran short causing strikes and riots; fever epidemics ravaged the makeshift work camps; thousands died as wages failed to keep up with food prices.

At the same time, grants for relief committees were slashed, forcing the destitute to seek aid from private charities or in the overcrowded workhouses.

The government acknowledged the policy disaster, not least because it was expensive as well as counter-productive: £5 million had been laid out on the public works. Under pressure from humanitarian groups such as the Quakers the state now turned to direct feeding of the poor via a network of soup kitchens.

These were to be funded by loans repayable through the poor rates by Irish landowners and farmers. Once in operation, this form of direct relief did make a difference in getting cooked food (in the form of a ‘stirabout’ of maize and rice) to those most in need and brought death rates down.

By July 1847 over three million people were being fed including most of the population of some western districts, albeit with the minimum required for survival. This was the most successful form of relief but was flawed for two reasons.

Firstly, Trevelyan’s insistence on bureaucratic procedure and landlord resistance delayed its implementation in many places until June, despite the government having closed the public works in stages from March.

Secondly, the intervention was strictly temporary and was wound up (with its initial budget underspent) in August once the next harvest season arrived, when the government wrongly announced the Famine over.

Introducing the system earlier and reviving it in response to continuing famine over the next two-three years, at a time when cheap imports had finally brought down food prices, could have saved many thousands of lives. 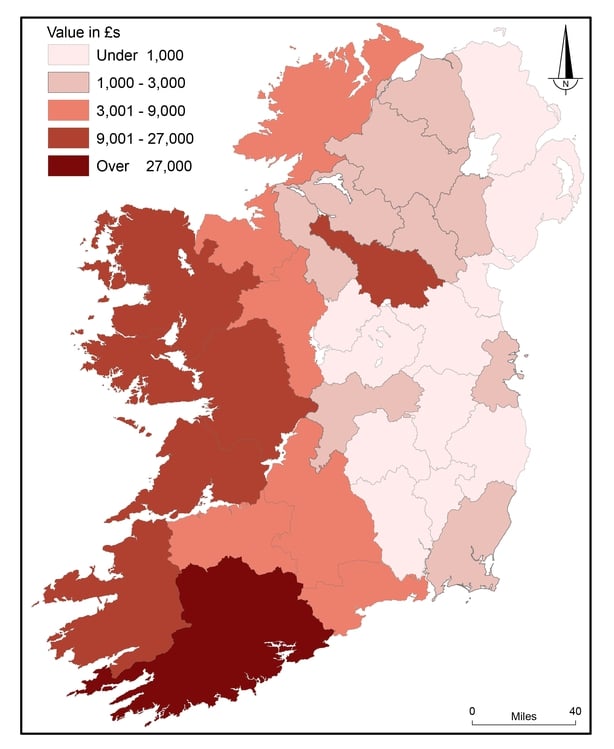 This map shows the percentage distribution of the maximum population receiving food relief under the Temporary Relief (Soup Kitchen) Act.

Probably the most successful Government intervention over the years of the Great Famine was the introduction of the soup kitchens in the spring of 1847. The Government had come to recognise that the public relief works were both failing to stem the march of famine and fever and were deemed to be far too costly.

Hence the change in policy. Although there were often deadly delays between the closure of public work schemes and the provision of soup kitchens, nevertheless, when established, the food provided saved the lives of thousands of starving people.

The relative success of this scheme was a consequence of effective interaction between local relief committees in the parishes/district electoral divisions and central Government. The demand for and provision of food for the starving people varied tremendously across the country: in some northeastern and east coast poor law unions, the proportion falls below 10% whereas in much of Connacht, Clare, west Limerick and peninsular southwest Munster four out of every five persons were often dependent on the soup kitchens.

Over the island as a whole, one-third of the population was dependent on these food supplies in the summer of 1847. But the soup kitchens were only part of a Temporary Relief Act – their discontinuation in the autumn of 1847 condemned many to certain death.

Instead, the government now threw the weight of famine relief onto the poor law, which was amended to allow outdoor relief but remained grossly unsuited to dealing with a national crisis. The poor law was funded from local taxation, which had collapsed in the west due to the impossibility of collecting sufficient rates from starving farmers and indebted landlords.

Facing a political backlash in Britain against Irish ‘ingratitude’ for previous aid, the government now refused assistance to the ‘distressed unions’ of the west, directing them first to private charity and then to small subsidies funded by a ‘rate in aid’ levied on the recovering districts of the east and north of Ireland.

With masses forced into the workhouses and outdoor relief yards due to landlord clearances (worsened by a poor law clause denying relief to those occupying more than a quarter acre of land), fever, disease and starvation killed hundreds of thousands in 1847-50. 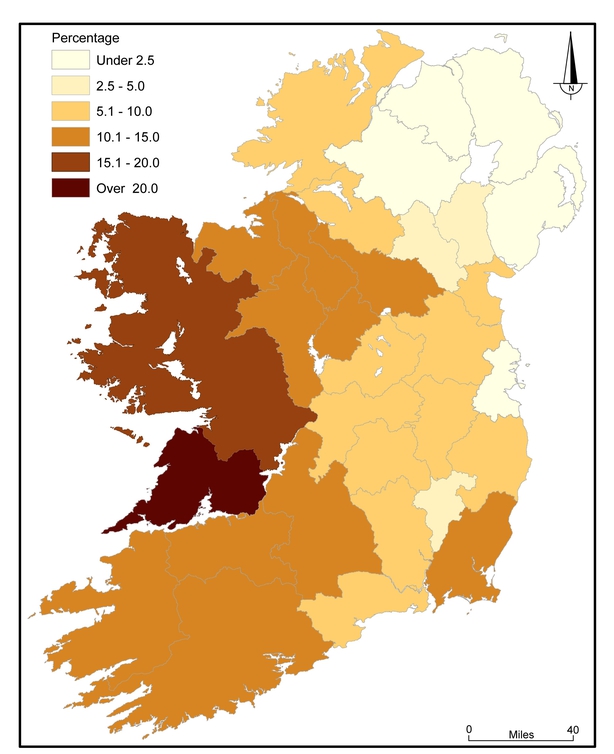 Carlow, Dublin, Antrim, Down, Londonderry and Tyrone saw fewer than 5% employed on these schemes. The distribution of public works was therefore concentrated in these regions which had consistently shown high levels of vulnerability.

However, the public works were abandoned because mortality had reached such alarming proportions. The poorest areas in the west and south –which had depended largely on these works for relief–lost heavily in population in the spring of 1847.

Even before the beginning of 1847, sickness and weakness arising from the want of food meant that many families were unable to provide an able-bodied member who could go to work on the roads.

Long journeys to works on foot, aggravated by a severe winter and lack of clothing, were further major handicaps to a weakened population. Food prices rose and public works wages were insufficient to support a large family. Death from starvation and/or fever resulted.

What could have been done? Reviving soup kitchens would have made some immediate difference to mortality. Other measures proposed at the time included assisted emigration for those who could not afford the fares, land reforms to curb evictions and developmental work schemes to build railways and drain land for cultivation; all were rejected.

A fiscal crisis in 1847 made funding these difficult, but critics later drew attention to the contrast between the £8 million spent on the Irish Famine (over half of which was initially in loans) with the £20 million spent to reimburse British slave-owners during abolition in 1833, and the £69 million spent on the Crimean War of 1854-6.

Prejudice and ideology combined to deny Ireland the resources required to keep its people alive; instead they were directed to ‘self-help’ and when this failed left to the operation of ‘natural causes’.

Professor Peter Gray has been Director of the Institute of Irish Studies at Queen's University Belfast since 2016.