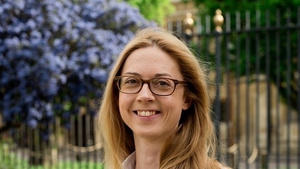 In 1846 The Economist magazine declared that Irish distress was "brought on by their own wickedness and folly". Such attitudes were not uncommon in the British media during and after the Famine, as Niamh Gallagher explains.

The Victorian press was the most important medium through which the British public learned of what was happening on the island next door. Revolutions in the printing industry and changes to tax laws had caused an explosion in the number of newspapers and periodicals that could be purchased in the 1840s, though some newspapers were more important than others.

The London-based daily, The Times, was the most influential. With a circulation of more than 35,000 copies per day in the early 1840s, it vastly outstripped its competitors, and the extensive rail network emanating from the capital ensured that it was sold across the country.

Seriousness was its hallmark and its readership included the upper-middle classes and increasingly influential middle classes, including many who had connections to the government and held other positions of power and influence that would shape public responses towards the Famine.

From mid-1846, when a second and more devastating crop failure began to turn a crisis into a disaster, The Times had a leader or column on Ireland almost every day and its overall message was clear. Time and again it argued that the Imperial Exchequer should not fund Irish relief.

'Nothing really so peculiar'

The worst famine in a century was depicted as an extension of normal, recurring events, and the newspaper consistently complained about the financial burdens forced on British workers for the sake of the starving Irish. On 15 September 1846, its editorial declared,

'It appears to us of the very first importance to all classes of Irish society to impress on them that there is nothing really so peculiar, so exceptional, in the condition which they look upon as the pit of utter despair'.

The notion that the Irish were leaching off the English taxpayer (often used as a synonym for the British taxpayer) was a view bound up with contemporary debates about politics, culture and the economy, as well as emerging ideas about race.

The Irish did not fare well in such theories. Amongst politicians and in large sections of the public, they were viewed as inferior and antithetical to the English. While pity and sympathy for Ireland’s plight was not uncommon in early newspaper depictions of the Famine, negative stereotypes were just as prevalent, and the Irish were often viewed in opposition to the English labourer, who typified the ‘respectable’ poor whom the indolent Irish were trying to abuse.

The Times argued that Ireland should ‘pay for its own improvement’ (19 August 1846); the apparent unwillingness of its people to do so demonstrated ‘a case of permanent and inveterate national degradation’ (12 October 1847).

'Their own wickedness and folly'

Nor was The Times alone in its view. Other publications claimed that the Irish were responsible for their own misfortune. The Economist, founded in 1843, declared on 10 October 1846 that Irish distress was ‘brought on by their own wickedness and folly’.

Punch, a new type of illustrated magazine founded in 1841, portrayed these views pictorially. In one cartoon from February 24, 1849,  we can see a smiling, shabbily dressed Irishman (denoted by ape-like features, clothing and a clay pipe) riding the shoulders of England's respectable poor with a sack of £50,000 slung over his shoulder.

These national views often complemented provincial reportage elsewhere in Britain. In Liverpool, the extensive immigration of the Irish poor had provoked questions about the social ills impacting the city - questions which Victorian society had become increasingly preoccupied with since the early nineteenth century.

The sheer number of Irish migrants passing through the city had created a population explosion that local authorities were not equipped to manage. In 1850 for example, 251,369 Irish migrants arrived in the city, of whom 77,765 (31 percent) were recorded as paupers. Irish immigrants were often in a state of extreme distress, destitution and exhaustion. The Liverpool Mercury reported in the winter of 1847:

The fact is; that in the cold and gloom of a severe winter, thousands of hungry and half naked wretches are wandering about, not knowing how to obtain a sufficiency of the commonest food nor shelter from the piercing cold.

The numbers of starving Irish men, women and children – daily landed on our quays is appalling; and the Parish of Liverpool has at present, the painful and most costly task to encounter, of keeping them alive, if possible.

Rising incidences of poverty, violence, crime, alcoholism, vagrancy, and prostitution were often linked to the Irish, which fed into and shaped national stereotypes. In February 1850, The Liverpool Mercury reported the

‘lamentable excess of crime in Liverpool’; 3,264 of the 6,194 persons brought before the city’s magistrates in the previous year ‘were natives of Ireland! … This constant influx of Irish misery and crime it is almost impossible to restrain.’

Long-lasting impressions of the Irish as poor and prone to drinking and fighting endured throughout the nineteenth century and appeared to be backed up by statistics. In 1871, the Irish-born comprised 15.6 percent of Liverpool’s population yet accounted for 33.4 percent of arrests. This overrepresentation of the Irish in crime figures was a feature of other Lancashire towns as well.

High representation in crime statistics was matched by over-representation in health figures. With extreme poverty came typhoid, cholera and other highly contagious diseases, and as Irish migrants squeezed into overpopulated areas around the Liverpool docklands, such disease spread like wildfire and seeped out into the resident population.

The medical journal, The Lancet, described the 'starving and fever-stricken' Irish who arrived in Liverpool during the first six months of 1847:

‘80,000… located themselves in dog-kennels and cellars, and remained to glut the labour market and propagate a wretched mode of life. In this unhappy year, 60,000 persons were attacked with fever, and 40,000 with dysentery’ (19 November 1870).

Somebody else's problem: responding to the crisis

Editorials and commentaries are only part of newspaper reportage of the Famine, however. Their columns provide windows into how local communities responded to the crisis and how civil society mobilised to help (or, in some cases, to stymie assistance, and make the stricken Irish somebody else’s problem).

Philanthropic activity to relieve Irish distress was widely reported. On 22 January 1847, The Liverpool Mercury noted that Liverpool Catholics had reportedly raised £2,000 in just over a week to help destitute parishes in Cashel and Tuam (a sum equivalent to perhaps €180,000 today).

Philanthropy was extensive in Britain in 1846-7, though it tailed off at the end of that year. Some of the most successful relief committees were located in Manchester, Birmingham, York, Leeds, and Newcastle and not all contributors were the reasonably wealthy middle classes. The Times noted that

‘Penny subscriptions are actively carried on by tradesmen in the metropolis, the sums thus raised being weekly forwarded to the distressed districts’ (21 March 1847).

Newspapers also shed insight into individual experiences of the Famine, which can be lost when discussing such an immense crisis. Some newspapers like The Times shied away from dwelling on harrowing details in their editorials in an effort to not offend their middle-class readership, but these stories often appeared elsewhere in its columns and in those of other organs.

In Liverpool, one magistrate, Mr Rushton, spoke of an Irish woman who delivered twins in a cellar where twelve other persons lived ‘without any of the conveniences of nature’ (29 January 1847). The next day in Huddersfield, the Leeds Mercury reported the arrival of many destitute Irish beggars, while on 2 February 1849, the Hull Packet reported the emergence of cholera in an Irish family (the father subsequently died).

Newspaper columns offered spaces for individuals to challenge negative depictions of the Irish. On 5 February 1847, the Society of Friends published a report in The Liverpool Mercury refuting claims that the Irish were simply arming themselves through relief funds (a misconception tied up with depictions of the violent, ‘free-loading’ Irish) and made clear that

‘It is quite impossible that people dying with hunger or earning only 8d. to 10d. per day upon the public works, with large families to support out of so small a pittance, could buy them.’ They declared that such accusations were ‘cruel and unjust’.

There was no single view of British press reportage about the Irish Famine, but the views that were presented often drew on pre-existing assumptions and were influenced by geographical location, individual experiences, contemporary debates and the passage of time.

Newspaper editorials certainly shaped the public’s response towards the Famine, but the public also shaped the discussion, and newspaper columns were a site where competing views and responses to Ireland’s tragedy played out.

Niamh Gallagher is a Lecturer in British and Irish History at the University of Cambridge, a Fellow of St Catharine's College, and winner of the Royal Historical Society’s 2020 Whitfield Prize for her book, Ireland and the Great War: A ...