In Irish folk tradition, the calendar is principally split into ‘Quarter Days’, so called as they divide the year into each of its four seasons of summer (May Day / Bealtaine), autumn (Lammas / Lúnasa), winter (Halloween / Samhain) and, of course, spring (St. Brigid’s Day / Imbolc), which falls on the 1st of February. Jonny Dillon, folklorist, tells us of her cultural significance.

St. Brigid’s Day is dedicated to the saint nicknamed Muire na nGael or the ‘Mary of the Irish’, a designation given to her on account of the adoration and high regard in which she has long been held by the people of this island. The special position attributed to her is reflected even in the name Brigid, which means ‘high’, ‘lofty’, ‘elevated’, or ‘exalted’ one.

To come to a full understanding and appreciation of her feast however, we must examine the Pre-Christian roots, not just of the celebration, but of the figure of Brigid herself.

Prior to any veneration of the early Christian saint, the 1st of February was the day on which the festival of Imbolc was held in Ireland; a festival which, in welcoming the arrival of spring, had as its focus fertility and propagation. The word Imbolc literally means ‘in the womb’, though it also appears in early literature as Oímelc meaning ‘lactation’; both words however, attest to a consideration at this time of birth, renewal and the feminine.

Attached to the celebration of Imbolc was the Pre-Christian deity Brighid, patroness of poets, smith workers and livestock, goddess of healing and daughter of the Daghda (who himself was father-god of the Tuatha Dé Danann; the mythical race said to inhabit Ireland before the arrival of humans).

The festival of Imbolc, dedicated as it is to the goddess Brighid and falling as it does on the 1st of February, would seem later to have become heavily associated with the woman who, born in Co. Louth around 455 AD, Christianised her tribe, took the name of Brigid, and went on to establish what is likely Ireland’s oldest monastery at Kildare (a demonstration of the central role of women at the earliest phase of the Christian church in Ireland).

The most widely known custom connected with St. Brigid’s Day involves the construction of rushwork crosses. These crosses are most likely Pre-Christian in origin and appear in a variety of types; most familiar perhaps is the four-armed, swastika type cross, although there are also three armed crosses and elaborate lozenge type crosses found in other portions of the country. 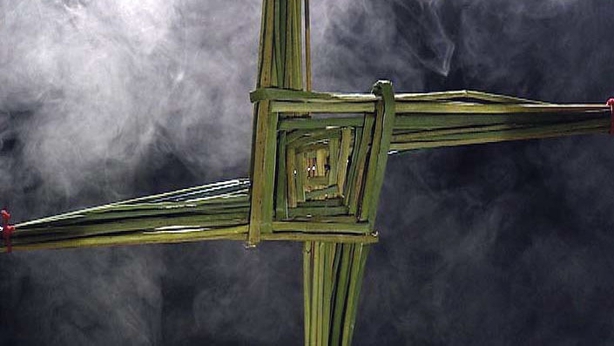 These crosses, hung in the rafters of the house, were employed to garner the blessing of the saint and to protect the home against fire. The cross making tradition was quite weak in Leinster, and would seem to have been almost entirely unknown in Co. Wicklow (although there is small evidence for the construction of crosses in the area around Lough Dan in the centre of the county).

More widely observed across Ireland, was the practice of dressing up the dash of a churn (a once common household item used by our forebears in the production of butter) as an effigy of the saint. This effigy was called the Brídeog.

The Brídeog having been constructed, a band of young men would travel the locality from house to house masked in ‘vizards’ so as to be rendered anonymous, and, wearing ‘strange clothes’ and women’s garments, this motley assortment (known as ‘Biddy Boys’) would play mouth organs, melodeons, and concertinas in each of the houses they visited.

Upon entering the house the Biddy Boys would begin their music, singing and dancing, and the leader of the procession, brandishing the effigy of the saint, would entreat the occupants therein to hand over a few pence in order that St. Brigid might bless and protect them in the year ahead. The money gathered by the Biddy Boys was thereafter used in organising a dance in the locality (or, as was described in one instance, put to good use in an altogether more private capacity at a local public house!)

St. Brigid herself was said to travel across Ireland on the eve of her feast, and items were often left outside the house overnight so as to procure her blessing. In the land around Lower Calary in north east Wicklow, a dish of salt was kept outside on the eve of the 1st of February, this was then used to cure sore throats. In other parts of the country a ribbon or piece of fabric was left out overnight. This was known as ‘Brigid’s Mantle’, and was used to ensure fertility in women and assist them in childbirth.

St. Brigid’s curative powers are further recognisable in lore regarding holy wells in Wicklow that bear her name. Lower Calary in north east Wicklow has two holy wells dedicated to St. Brigid, the water from one of which was renowned to have a cure for vomiting. In Rathdangan in west Wicklow individuals with warts would visit their local St. Brigid’s well nine days in succession, bathing the affected area in order to rid themselves of their ailment. Similar practices were carried out at St. Brigid’s well in Kilranelagh, in west Wicklow, and small items and relics were left at this well in honour of the saint; a ribbon or a ‘holy picture’, we are told.

Symbols of fertility, rebirth and femininity resonate through Brigid, and with spring come the gifts of propagation, renewal and growth. There is a promise in the air: soil is yet to be tilled and our young yet to be born, but the harsh rigours of winter are passing away.

Brigid, spring, you are welcome, come in! 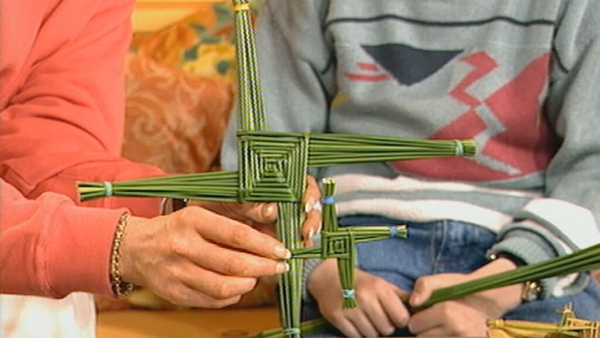