16-year-old Eimear Nic Dhonnchadha from An Cheathrú Rua in Conamara told an audience at Leinster House about her love of the Irish language and her hopes to reform the way it is taught in school, at the recent Child Talks event hosted by the Ombudsman for Children's Office.

Now in its fifth year, Child Talks gives children a platform to share their experiences on issues that are important to them. Inspired by the location, the theme of this year’s Child Talks was 'If I were Taoiseach for a day…’.

During her talk, Eimear spoke passionately about her concerns for the future of the Irish language:

"Irish should be split into two subjects, one compulsory and one optional. Compulsory Irish would be completely focused on communication. Grammar, reading, and writing would of course be a part of the curriculum, but at least 50% of marks would be awarded to an oral examination. Ireland’s youth would leave school with their national language at the tip of their tongues, proud of being able to carry on thousands of years of history and culture" 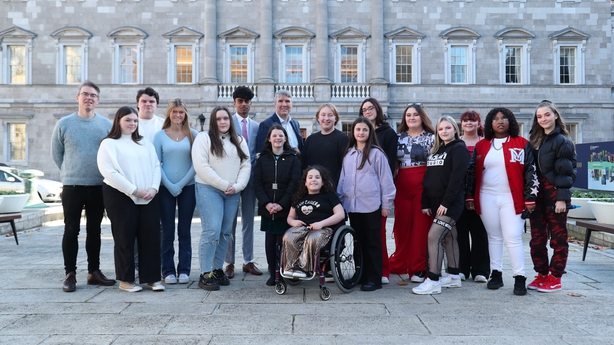 Eimear was part of a group of children and young people aged 11 to 17 to share their stories, with other topics on the day including homelessness, autism supports, accessibility, rural transport, female empowerment and listening to children. Child Talks was also streamed live in classrooms across the country.

Speaking about the event, the Ombudsman for Children, Dr Niall Muldoon said:

"It is significant that our fifth Child Talks took place in Leinster House. We wanted those in power, those making decisions that affect children, to hear from them directly so that they can fully consider their views.

"The issues raised by the children are topical and relevant; they talked about their personal experience of homelessness, about why they feel supports for children are not good enough, about the constraints they feel the current education system puts on their ability to reach their potential, about equal access for everyone and a lot more."

Children from across Ireland applied to take part in Child Talks. Some had experience of public speaking and some have never spoken publically before. Over the past three months, the Ombudsman for Children’s Office, with the support of Dublin Story Slam, have worked with the young people involved to help them tell their story.