It's a green-tinted week on telly as we head into Saint Patrick's Day and beyond, with Brendan O'Carroll's personal look at 1916 and RTÉ's broadcasting of the ground-breaking drama Insurrection.

Pick of the week: Insurrection, Friday, RTÉ One

Whatever your view of repeats, this is certainly a most welcome second coming.

For the first time in 50 years, RTÉ One is broadcasting this eight-part drama that was commissioned for the 500th anniversary of the Easter Rising in 1966.

Insurrection was set in the style of a special TV News report depicting events as they unfolded day by day, with a studio presenter (played by Ray McAnally), correspondents on the streets of Dublin reported on various events, interviewed with leaders, held vox pops with volunteers and citizens as the Rising crippled the capital.

The cast included many well known actors of the day including Anna Manahan, Jim Norton, Ronnie Walsh. So what you get here isn't just a view of 1916, it's also a prism into what top telly was like 50 years ago.

Star of the Week: Brendan O'Carroll's Family at War, Sunday, RTÉ One and Thursday, BBC Two

And now for the serious side of Brendan O’Carroll. His connection to the Easter Rising is quite personal as three of his uncles were among the rebels who took control of Dublin on Easter Monday 1916.

In this documentary the Finglas funny man retraces his uncles’ footsteps and explores the extraordinary story of the Rising, from the formation of the Irish Volunteers in 1913 through to the drama of the revolt itself and the historic events that followed. 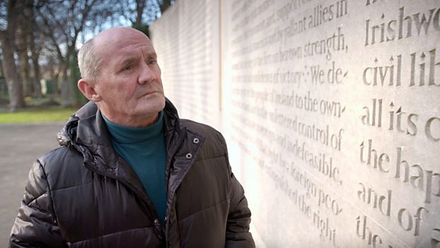 Comedy and Science collide in Neil Delamere's brand new quiz show. Each week he'll be joined by team captains PJ Gallagher and Aoibhinn Ní Shuilleabháin, as their panels of comedians and science personalities attempt to answer some of humanity's most pressing questions.

Presenters Bláthnaid Ní Chofaigh, Aidan Power and Des Cahill are on the streets of Dublin for the annual parade celebrating Ireland and its people.

The 2016 parade theme, Imagine If, has been inspired by the imagination of the youth of Ireland as they look to the future. Ireland’s leading pageant companies will bring their vibrant interpretations of the theme to life with spectacular pageantry and colourful performances. FYI: the St Patrick’s Festival Highlights will be shown the following Sunday on RTÉ One.

Inside the GPO, Tuesday, RTÉ One

Best known as the headquarters of the 1916 Rising, the GPO has been at the heart of Irish life for 200 years. This fly-on-the-wall series goes behind the scenes at Ireland's busiest post office, with 950 staff. Warning! Postal orders and stamps from the start.

Maître d' Fred and his team return for a new series, opening the doors of the First Dates restaurant to more hopeful singletons from all over the UK. Choir master Jay and banker Robbie get the ball rolling.

For starters, Mary Berry discovers the traditions followed by diverse British families and communities during Lent and Good Friday and the food that brings them together as each prepare for Easter.

This two-parter tells the story of the struggle for Irish independence through newsreel that has been colourised.

As Ragnar lies in his sick bed in Kattegat, events unfold beyond his control. Meanwhile, Bjorn orders the arrest of Floki for Athelstan’s murder, and Rollo betrays the last of his Viking supporters to strengthen his position in the French Court.

This second season of the grimey drama starring Sarah Lancashire as Yorkshire cop Catherine Cawood has been superb. In the finale, Catherine heads to the school to find out who filled young Ryan's head with ideas about his criminal dad.

In what promises to be a dramatic season finale, everyone is feeling the shockwaves following the fire at the new Knick, and Thackery decides the only surgeon he wants operating on him is himself.

Sean Gallagher, runner-up in the 2011 Irish presidential election, shows off his culinary skills and recreates a course from his wedding, a tian of crab meat.No, not a tin, a tian.

Bridget is a finalist for the Housewife of the Year competition and Eamon goes to extreme lengths to make sure she takes home the top prize. But will it be enough to beat the reigning champion?

Ten years ago, an off-duty policeman was killed in a swimming-pool car park. What has never been determined is which one of the three armed robbers serving life for PC Prescott's murder actually pulled the trigger.

The second season of the stylish French political drama concludes as the president faces a personal and political crisis. Spin doctor Simon Kapita agrees to help, but his skills are stretched to the limit.

This so-so US drama is back for the second half of its debut season, with the identity of Jane Doe's tattoo artist now no longer a mystery. I still think she and tough guy Weller will end up getting hitched, though.

It’s a happy day in Pontyberry as Stella and Michael tie the knot in the 50th episode of Ruth Jones’s comedy drama.

The Icelandic drama comes to an end. Having found the key to the padlock of Hrafn's shed, Andri has a definitive clue to the identity of the murderer - but it's not who he was expecting.

Jo Nesbø’s frankly daft thriller concludes with the Americans keen for Jesper Berg to leave their embassy and offer him a ticket to Switzerland, which he promptly declines. Free Norway offer an alternative.

The remaining members of the group pull together in an attempt to uncover the identity of their killer - and maybe survive the stag weekend from hell.

Season two of the epic period drama picks up in 1935, a time when India dreams of independence, but the British are clinging to power.

A terrorist attack against the British Viceroy of India (Patrick Malahide) puts Aafrin Dalal (Nikesh Patel) in the frame. As the Viceroy fights for his life, Aafrin struggles to keep his secret life as a nationalist spy from being exposed.

Back from its mid-season hiatus, this episode's all about the young ones. Family patriarch Jay struggles with the age gap between the parents of Joe’s latest play date, and embarrasses himself when trying to impress the older man.

Meanwhile, Cam has his own play date problems when he tries to play matchmaker between Lily and her crush, only to discover that he’s completely misunderstood the direction of her affections.

When elected, Barack Obama promised to change the USA. Par for the course, he discovered that change would be harder than predicted and his plans were knocked off course by the worst financial downturn since the Great Depression.

If you're feeling socially inept because you haven't seen Game of Thrones, here's a chance to redeem yourself and widen your circle of friends.

Ahead of season six, all five previous seasons are now on tap on Sky. Just remember to feed yourself now and again or you won't make it to season six.

Pretty topical film given the Easter we're facing into this year. Neil Jordan was inspired when he decided to play out the murderous years after the Easter Rising - when Irish folk started killing each other as well as trying to end British rule in Ireland - as a gangster movie.

A superb cast includes Liam Neeson in the titular role, Aidan Quinn as Harry Boland, and the late Alan Rickman as Eamon deValera. All three play blinders in this revolutionary rollercoaster ride. Even Julia Roberts' isn't too 'begorrah' in the role of Kitty Kiernan.

And as for the finale, with Sinead O'Connor singing She Moves Through the Fair as Collins meets his fate at Béal na mBláth, well that's jaw-droppingly brilliant. Never before or since has civil war seemed so sexy.