It is a dark, dank place, shadowy and secretive. Men in long black coats scurry down wide streets full of narrow minds. It's raining. It is always raining . . . even the elegant Georgian buidlings have grim faces in the perpetual twilght.

This is the cloistered Dublin of the 1950s and in many ways the buttoned-up city is the star attraction of new RTÉ/BBC production Quirke, the new television adaptation of the novels by John Banville's author ego Benjamin Black.

Into this crucible saunters - he rarely strides - Quirke, a charismatic pathologist played by a flinty Gabriel Byrne. He is hunched in a long black coat and hat, almost constantly pulling on a cigarette, wry and watchful as he doses himself with bolts of hard liquor.

Quirke - we're never given his first name - is a decent skin, does an honest job but too often he finds himself turned amateur detective as he bumps up against Offical Ireland and the many-tentacled establshment as he goes about his job.

The country is still bent out of shape and everyone talks out of the side of their mouth. Quirkes moves in and out of the underbelly of the city but he is also on the sidelines of the upper echelon of Ireland's established political and legal classes. He is the adopted, and much loved, son of Judge Garrett Griffen who is played with Patrician-like gravitas by the great Michael Gambon.

In the first episode, Chrisitne Falls, a cadaver goes missing from the morgue and when Quirke starts asking questions, the answers are either short, urgent orders to mind his own business or short, urgent digs to his face.

This is Irish noir of a high and very stylish stripe and London-born Nick Dunning who plays Quirke's taciturn and querlous half-brother Malachy is a huge fan.

“I absolutely love it, film noir is one of my favourites. Double Indemnity is one of my favourite films of all time," says Dunning. "I think it’s great. The way that they bring in the dark side of life and everybody seems to be suspicious of everybody else and you’re never quite sure what’s going on. Nobody has a clear motive, it’s a very paranoid world. I wouldn’t like to live in it but I like to watch it.”

I believe that the first read the script for Quirke you thought Malachy was a a bit of a swine . . .

“I did actually. I judged him a bit and I didn’t know how I could really get into it. Then  I read it again and I thought, hang on - this guy doesn’t even know what’s happening in his life. He’s not even aware of it and what's actually going down is that he’s caught, he’s trapped by the way society supposed to be and what is expected of him and how he’s supposed to perform, how he’s supposed to be as a husband and a son, a doctor . . . and of course it’s much harder than that. It’s so difficult because you can’t conform these expectations that society has of you and I thought that’s interesting.” 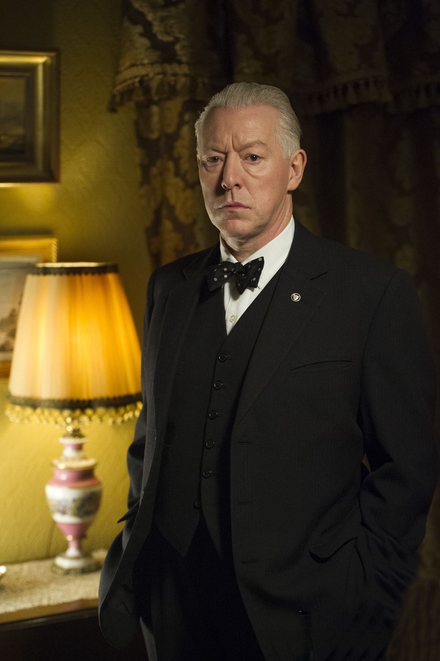 Fifties Ireland was a very straitened, society, very secretive. Did you research the era much in preparation for the role?

“We did a lot of stuff actually. We read up on a lot of history books and we watched a few films and reference points. I bought in a book of photographs and we all talked about them and gradually each one of these pictures started to form an idea. While we were in the rehearsal area, the design people would put pictures up around the room and you’d start making ideas and connections between these images of these men in suits and dark cars, very austere, oily kind of film noir images. And we thought that’s actually the world we’re looking for! it is a dark place and it is a secretive place. It is a seed bed of film noir really.”

It's still a priest-ridden society with big business flexing its muscles and politics looming everywhere but Quirke is also strikingly contemporary in its issues and storylines . . .

“Absolutely. I think that’s one of the functions of the series, to scratch the surface a bit. These are issues that people can talk about. I think part of the function of art is to do that, is to hold the mirror up to nature - this is what’s going on now. We wanted to raise issues and say well it hasn’t gone away it’s still there. There are a lot of people still in pain and we as a society have a duty to take care of that.”

You describe the strained relationship between Malachy and Quirke as a Cain and Abel dynamic . . .

“Very much so. That’s what they’re like. Gabriel and I were talking about. If you have brothers there is a set pattern - we all talk about the elder brother and the middle brother . . . but if someone is an adopted brother, what does that do with the dynamic? And what it’s done to this dynamic is really screw things up with Gambon’s character, the dad, I’m the real son and Gabriel is the interloper, the cuckoo in the nest and yet the father adores him and despises Malachy to a certain extent – what’s that about?

"There was a turning point that Gabriel and I had. We kept thinking we don’t want to do the obvious thing where they hate each other all the time and they’re screaming at each other. That would have been awful and tiring for an audience to watch but the idea that the other person has what you want is much more interesting and that’s when we started to make some kind of headway.

" Gabriel was looking at Malachy thinking - he’s married, he’s got a stable household, he’s got a child, he’s got responsibility in society and Malachy is looking at Quirke thinking, he’s so much easier going than I am, so much more relaxed and at peace with himself apparently, and my father seems to like all this. That was a really useful way in for both of us.” 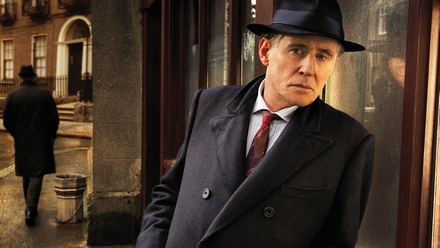 There are three feature-length episodes to come but clearly you think we could be seeing a lot more of Quirke . . .

“Oh yes. It’s a cracking good dynamic and it’s an unusual one as well. I just think it’s an engaging storyline and I like the idea of it being  a thriller any way. Personally I love the background, I think it’s so different, and dark and weird and strange. I find that to be quite magnetic. You know the way Denmark and Sweden gets to bring out all those things like Hollander and The Killing? It's Nordic noir and I thought, what’s wrong with Celtic Noir? I think it’s a great vein because there was so much in that time period. That kind of idea is still very poignant and affective and affecting. I think it creates great stories. The two episodes of Quirke after the first one are very surprising . . . ”