The Doors go digital on a new iPad only app that charts their rise from rock `n’ roll outlaws on The Strip to house band at the end of the hippy dream. Alan Corr swipes and taps for scenes from inside the goldmine of one of the most undervalued bands of the rock era

In another sign of how far we have travelled from the demimonde of the sixties counterculture, here is The Doors App. Yes, a downloadable piece of computer technology that allows the user to trawl through every aspect of one of the rock era’s most underrated bands with a swipe of the hand and a tap of the finger. Orpheus in Cyberspace anyone?

The availability of this kind of immediate, easy-access tech is either a supreme irony for a band as bohemian, bluesy and arty as The Doors or the perfect kind of technological afterlife for an act who have unfairly become a jokey shorthand for America’s West Coast sixties era.

Either way, released a mere two weeks before Ray Manzarek’s sad passing on May 20th, The Doors App is pretty damn superb. It charts the rise of the American band that captured the cosmic dread of the late sixties and early seventies - the era of Vietnam War, the rise of Tricky Dicky, and the scary arrival of industrial military complex - like no other. 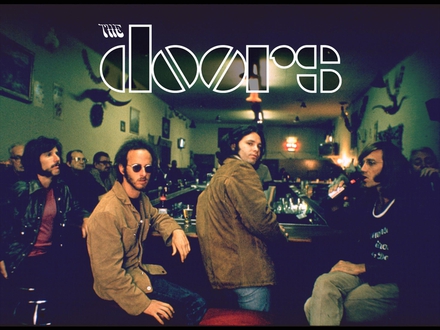 Overseen by Elektra Records boss Jac Holzman and with the blessing of The Doors themselves, The Doors app charts their rise from rock `n’ roll outlaws on The Strip to the apocalyptic house band of the frazzled end of the hippy dream. If you don’t already know the story, it is told here with red-eyed and sometimes painful honesty - how UCLA film students Jim Morrison, the beat poet army brat son of a US Navy Rear Admiral, and Ray Manzarek, the classically-trained keyboardist, met by chance on Venice Beach in ’65. After the pair had recruited John Densmore and Bobby Krieger, who themselves had met at an TM meeting (where else?), The Doors took flight with incredible speed and to huge success.

Of course, it all ended in bloated ignominy in a bathtub in Paris seven years later. The Doors App covers the history with an album-by-album, song-by-song account of their career written by the most excellent music journalist and writer David Fricke. A cast of hundreds have turned up, including the band members themselves, Holzman, engineer Bruce Botnick and producer Paul Rothschild, to tell their version of the whole ravaged saga.

The best-known and the most dismissed songs are all given a thorough examination and there is a well-deserved chance to re-evaluate The Soft Parade, the misunderstood 1969 album inspired by The Doors utter awe for Love’s second album Forever Changes. Fricke has written insightful overviews of key songs like Riders on The Storm and The End - Morrison visited a church across the road from the studio, dropped a tab, came back and nailed this hair-raising tale of Oedipal murder in two takes. 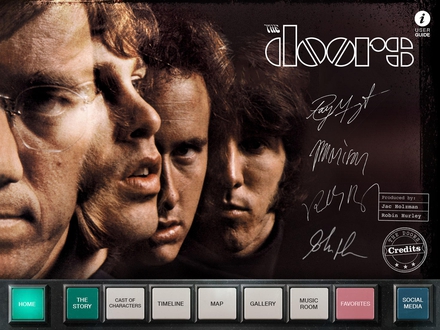 There is a great feature on the infamous “Miami incident” of March 1969 featuring FBI files, and arrest records, and a day-by-day travelogue of The Doors’ eventful European tour in ’68 (did Morrison sing backing vocals on Happiness is a Warm Gun when he visited The Beatles at Abbey Road?),

Besides the career and album overview and Jim’s evolution from handsome Venice Beach bohemian to William Blake quoting Christ figure, there are over 700 archive photos (including gig posters, album art, Jim’s baby pictures and Jimbo’s first police mug shot from 1963), a comprehensive account of the instruments and recording equipment used, a map of the LA locale The Doors developed and then festered in, memorabilia, lyrics to every song, ticket stubs, press releases, record contracts, and all the albums sitting in a virtual record box which you can flip through old school style.

However, don’t be disappointed by the fact that the app is short on actual music. There are good video and TV clips, and some fascinating demo versions but if you don't already have these Doors albums stored on your iPad, the music files here only provide tasters well signposted to the ubiquitous  iTunes store. Maybe Jimbo might have approved of the free download culture but Warners sure do not and at a snippy €4.99, there's no real surprise there.

It can be awkward to navigate and the lack of picture captioning is a nuisance but I spent hours immersing myself back into the compelling and dangerous world of The Doors with this excellent app. They are an undervalued band who retain an air of dark, seductive magic a full forty years after their demise.

A clue to their strange, lasting appeal is revealed here - back in 1967 at the very moment Jac Holzman was told Light My Fire was about to hit No 1, his watch stopped.