This warm, companionable session featuring ace vibraphonist Bobby Hutcherson's first Blue Note session under his own name was recorded in December 1969, but not released until 1999.

The tapes lay in the vaults, unreleased until that year when finally someone decided it was good to go and the world got to hear the five affably appealing tracks that are pure pleasure to imbibe. The personnel were Hutcherson on vibes, saxophonist Joe Henderson, guitarist Grant Green, Duke Pearson on piano, bassist Bob Cranshaw, and drummer Al Harewood.by

Hutcherson was born in Los Angeles in 1941 and actually began music life as a piano student at the age of nine. He heard a record by vibraphonist Milt Jackson at the age of fifteen and instantly began to absorb and immerse himself in music in general, and specifically study of the vibraphone. 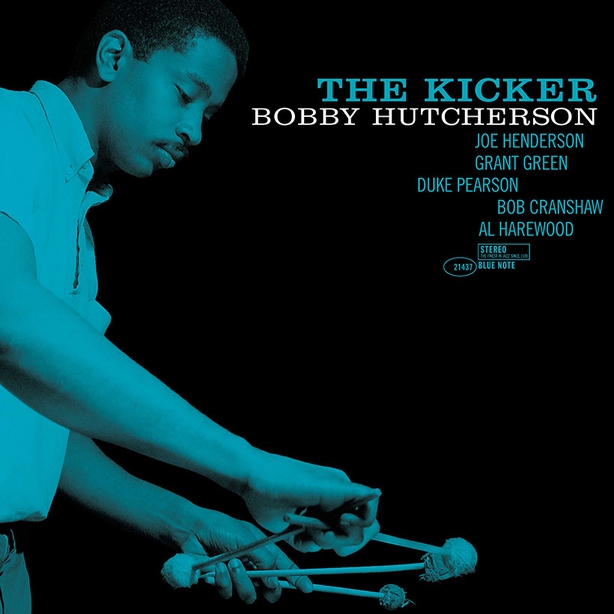 There followed years of playing with the likes of Jackie McClean, who brought him into his group. He would collaborate further with Andrew Hill, Eric Dolphy, Archie Shepp and regular associate Grant Green. Hutcherson died in Montara, California at the age of 75 in 2016.

Michael Cuscuna speculates in the sleeve notes to this vinyl reissue as to why Blue Note had declined to release the recording thirty years prior to its eventual release in 1999. He wonders whether it was "too loose around the edges," or whether the record label may not have deemed it a strong enough follow-up to the Idle Moments session.

That had been recorded in November 1963 and featured all of the above players, except Green. The legendary guitarist  brings his airily dulcet tones to the three final tracks of the five tracks included here. Henderson stars throughout with assuredly confident tenor, notably on his own composition, the energetic title track.

Meanwhile, Hutcherson lights up with the filigree of his vibes charming compositions such as the seductive opener Mirrors, the loping blues of Step Lightly, the sprightly Bedouin and the upbeat effervescence of For Duke P, which is dedicated to Duke Pearson for all his help and encouragement.

Long lost music until its discovery twenty-one years ago but it's never too late to get in the groove with this charming set.