Wexfordman Pierce Turner revisits the rich canon of Irish balladry - and a few too that have been incorporated into the tradition - on his new recording, a vibrant and refreshing homage to his roots.

Turner, a long-time resident of New York has throughout a fruitful life produced astonishing original music grown from an Irish seed bed. In the process, he has occasionally transformed the templates of Irish airs to craft his own magnificent ballads.

If the prospective listener has any sense of profound musicality, he or she cannot but be entranced by songs like Don’t Want Her to Feel This Way or All Messed Up, both of which feature on his astonishing Now is Heaven album, which appeared some 25 years ago. That record was a kind of watershed in Turner’s career, it seemed like its extraordinary dynamics could not be bettered as representation of a rare gift, gathering disparate elements to make something startlingly original.

The record was produced by the lauded John Simon, who had also produced Leonard Cohen's songs and The Band’s album Stagefright. Now is Heaven was a deeply important piece of Pierce-work, coming on the back of two preceding solo albums which ran riot with an almost ecstatic approach to song.

Turner has gone on to write other immortal ballads like Yogi with a Broken Heart and Snow. On his latest album, he turns his ear to songs he was reared on back in the 1960s and 1970s, the songs those of us of a certain age knew every day from the radio, before we discovered foreign shores and John Peel and Kid Jensen.

Some of what Pierce would have heard then were respected, patriotic ballads and some shaded into more lounge bar territory. Some of the songs here were built to withstand any kind of battering - not that Pierce batters, hey - but The Rising of the Moon, Muirsheen Durkin (here called Diggin Lumps of Gold), The Holy Ground, and Monto have seen out many spirited renditions, good, bad and indifferent through the years. On the new album, Pierce rouses them from their relative sleep - okay, let's call it a nap - into a rocky place, gunned-up a bit with guitar and drums. 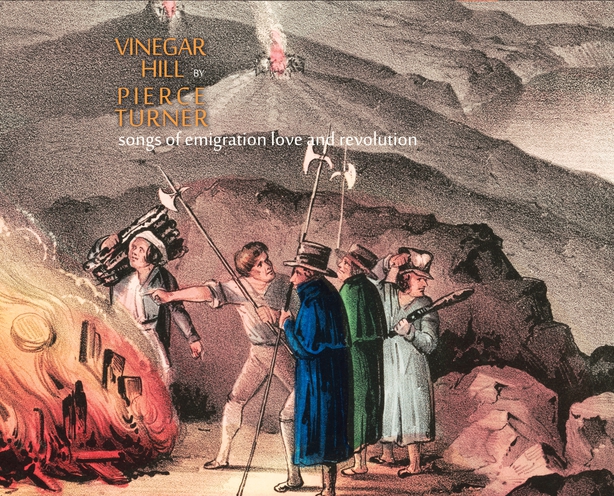 It’s the slower ones that your reviewer is particularly drawn to, the slower ones that have been made a bit faster, if you like. The Parting Glass is extraordinarily effective in his fresh new treatment which brings up the tempo, the voice is pristine, honest, unpretentiously dealing out the entrancing lines. As I Roved Out has been long associated with Andy Irvine, and Pierce takes the song to another plane because his voice is so different from Andy's. He still has a touch of the boy soprano and it his saving grace, but his rendition is really special, tender, winning.

Pierce totally occupies Bunclody with that beautiful burnished voice. 'Tis why my love slights me as you may understand/That she has a freehold and I have no land/She has great store of riches and a large sum of gold/And everything fitting a house to uphold. The interpretation concludes with a delightful musical coda on piano, reflective and intimate.

Bunclody progresses neatly into the next track, a solo rendering, again on piano, of Tabhair dom de Lámh. The musician introduces a little baroque friskiness into his free but visionary version of Ruaidhri Dáll Ó Catháin's early 17th century tune.

On the new record, Pierce plays keyboards, piano and guitar and he is ably abetted by trombonist Fred Parcells, drummer Karl Wright and bassist Tim Zambonifunk. If you have not had the opportunity so far, please wake up to his singular talent and make sure to catch him on one of his regular dates in Ireland.

On September 21, Turner will perform one of his always rousing, inspiring shows at Levis, Ballydehob. On October 22, he is in the Spiegeltent at Wexford Opera Festival, and on November 15, catch Pierce in Coughlans, Cork. In sum, this Wexford boy genius has a rare, blessed gift, he makes a kind of divine intervention in music.

Read our review of a previous Pierce Turner album, Songs for a Verry Small Orchestra here