Commissioned by the twenty-piece mini-orchestra Alarm Will Sound, Donnacha Dennehy's ambitious 'docu-cantata' The Hunger approaches an Irish Famine theme slantwise and with a kind of musical asperity and ruefulness.

Dennehy's driving, animated piece, majestic and rueful by turns, utilises instrumental harmonies and discordances to depict a kind of spiritual annihilation effected through the bumbling laissez faire political policies of the mid 1840s. The piece appears to approach sidelong to cloak in a meaningful score the stark narrative of starvation, death and bureaucracy in the shape of the heartless Famine Relief official.

Thus, slanting strings, slanting woodwind and by the fourth track, the work is well embedded, limber and agile in its watchful, prophetic air. We listen to the extended caoineadh of the two featured singers, Katherine Manley's burnished soprano and Iarla Ó Lionáird’s earthy plaint as the voices interweave. Meanwhile, the twenty-piece Alarm will Sound deliver an astringent score.

The music on the album represents the so-called 'concert' version, there is also has a longer stage version, incorporating video interviews with economists, historians and philosophers. The European premiere of that stage performance recently concluded a short run at Dublin's Abbey Theatre.

Composer Donnacha Dennehy so loved the voice of English singer Katherine Manley that he asked her to sing the role of Asenath Nicholson, whose first hand accounts of the Famine provide the narrative core of The Hunger's libretto. At the height of the Famine, Nicholson traveled from the United States to Ireland to walk through the island, staying in homes of the afflicted on occasion, as she recorded the pitiable witness accounts. 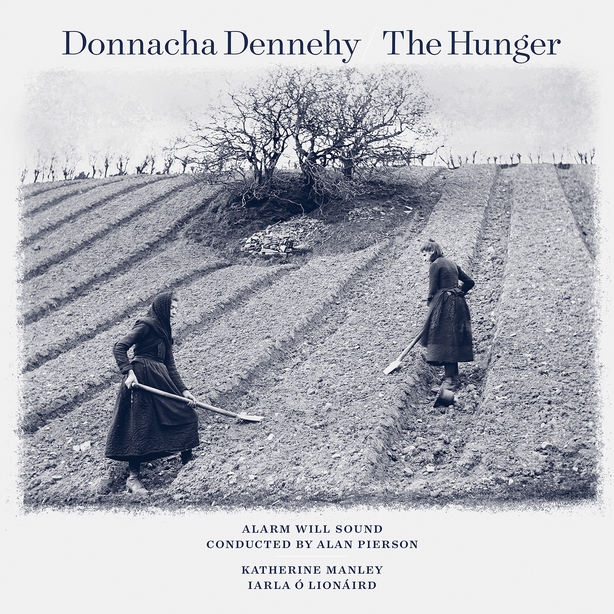 Nicholson's account was published in 1851 as Annals of the Famine in Ireland. Although profoundly sympathetic, hers was nevertheless an outsider’s perspective. To draw a local dimension into the piece, Dennehy invented the old man of the piece. His almost other-worldly story of mind-numbing suffering is represented by the voice of Ó Lionáird, using fragments of a rare Famine traditional song, Na Prátaí Dubha, which originated in Ring in County Waterford.

The song fragments are married with the lament for a dead child which the composer first heard in an unaccompanied version, as sung by the Donegal singer Cití Ní Ghallchóir. He employs Ní Ghallchóir’s own lyric for the melody which is credited 'anonymous.’

Aside from the Abbey Theatre run, The Hunger has been performed in BAM and the Kennedy Center in the United States. In September, Alarm Will Sound will perform a concert version of the piece at Princeton University where Dennehy is a member of the faculty of music. There are performances scheduled also for the Irish Arts Center NYC and at Boston’s Jordan Hall in partnership with Oxfam America. Details here.

The Hunger is an intriguing work of musicianship and while some naysayers may quibble at the absence of the instruments we know as part of the indigenous tradition, such as bodhrán, bones, pipes, accordion, it is undeniable that the resonant chamber sensibility and orchestral sweep of the work elevates it to a different plane.