The world of Morrissey has been a funny old place of late. Last year, the lifelong Coronation Street fan sensibly and naturally batted off an invite to play Dot Cotton’s long-lost son in EastEnders.

When his mostly enjoyable autobiography, the tartly titled Autobiography, came out it was mostly greeted with acclaim, it’s dense Dickensian prose hinting that perhaps his future lay in fiction writing. Then he turned around and made a serious offer to represent La Grande-Bretagne in The Eurovision Song Contest.

At a stately 55 years of age, it certainly seemed like Morrissey was becoming more and more like one of the seriocomic characters in one of his funnier solo songs. His legendary distaste for the music industry has long been reciprocated and of late, he has disported himself around the world with a face like a smacked pug.

As Graham Coxon quipped as long ago as 1993, when Blur stopped off at Stonehenge in in their tour film Starshaped: “It’s a bit like going to see Morrissey. Not as big as you thought.”

What a joyful surprise his tenth album is so. He launches into a realm of inventiveness, both musically and lyrically, that he hasn’t occupied in far too long. Sonically, it is more European and Latino in feel with soundscapes and strange mood pieces as the canvas on which he drips his occasionally poisoned but mostly elegant pen.

It is also an album of firsts for Moz. He has recruited multi-instrumentalist Gustavo Manzur and while long-time capo Boz Boorer is still part of the crew, the traditional wide-boys-with-guitars act has been alchemised into something quite flamboyant and beautiful.

After the dumbly strutting meat (chortle) and too much veg indie rock of recent albums, there is an appealing and wayward weirdness to the new songs. The sweeping title track opens with a didgeridoo (a didgeridoo!), the bright clack of castanets, and farfisa organs trills and throughout the near hour-long running time, there are arrangements and musical diversions that might be styled as Moz goes experimental.

There are some touchingly tender moments too. The near eight minutes of I am Not a Man (“I am something far more”) may begin as a beautiful gossamer light shimmer but expands into a symphony of pure sound and ends with the kind of breathless life-or-death drama that seemed to have long deserted him. The spiky rock-out of Istanbul also features a beautiful melody shrouding the darkest kind of tragedy - “I lean into a box of pine, identity the kid as mine”.

Smiler with Knife, the best song here, is heartbreaking with its warm auditorium-filling vocal and a real sense of ghostly longing. The pun-tastic possibilities of Mountjoy Prison cannot be resisted on Mountjoy, Moz’s very own Ballad of Reading Goal. “The joy brings you many things but it cannot bring you joy” he intones gravely and later, name checks the place’s most famous inmate, and fellow Crumlin boy, in the lines “Brendan Behan’s laughter rings for what he had or hadn’t done.”

No other pop singer this late in their career seems to be still trying as hard as Morrissey but he does offer up some pretty juvenile and petulant political views in places. Mostly, he cuts up rough on old topics. On The Bullfighter Dies, he cheers the death of the matador and Kick The Bride Down The Aisle will leave the sisterhood gasping as Morrissey rates the intelligence of a cow in a field over that of - what he sees as - the conniving bride.

We’re on safer and saner ground with the terrific Staircase at The University, a mix of macabre humour with added serious head injuries (a la Late Night Maudlin Street) as the band cook up Flamenco guitar flourishes and Morrissey nails one of his best vocal performances in years.

With this bravado mix of waspish humour, pure mischief and deadly earnestness, a star really is reborn. The campaign for Morrissey's five-night stand at Croker begins here. 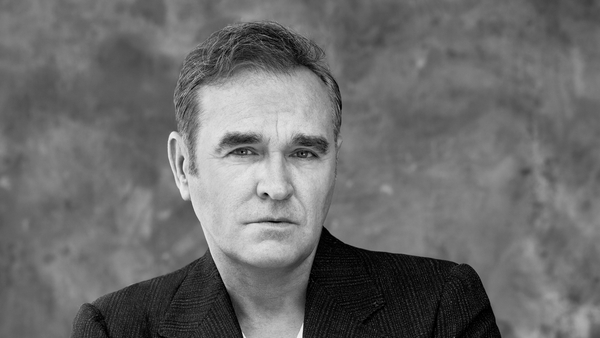 Morrissey cancels entire US tour due to illness