If you've seen Olympus and London fall earlier in the trilogy, you'll know what to expect, and you're either here for it or you're not.

Protecting presidents is Secret Service Agent Mike Banning's (Butler) bread and butter, but this time around he becomes enemy number one after being framed for an assassination attempt on President Trumbull (Freeman).

There are shootouts, car chases, big action set-pieces, a dodgy script, some hammy acting, and not a single real twist in the whole adventure. 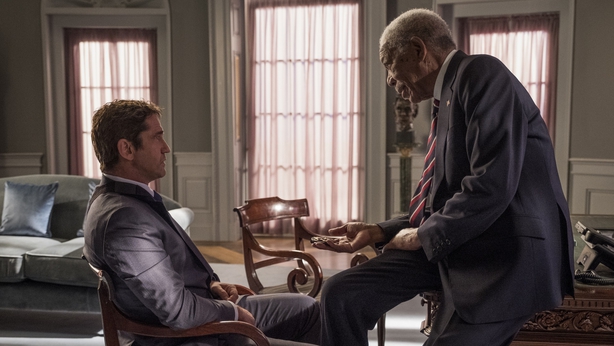 It's been a while since I've seen a film so text-book to its genre. As soon as a character is introduced you know exactly how their arc is going to play out, you can identify moments being set up to purposely divert your attention for a later bait-and-switch, and then you find yourself just waiting for the presumed twist to arrive, which it always does.

A repeated line in the film about deception rings particularly ironic. It's not even a case that the action is so good that the lacking script is possible to overlook. There are only a couple of really effective moments and the rest is standard fare, with some CGI issues in particular letting the aerial action down - it never looks real.

It's not a good film, it's not a thrill-ride and it's not memorable, but it is watchable in that last resort, leave-your- brain-at-the-door, background noise kind of way.

It is what it is.

"You're never going to get rid of Friends" - Aniston

Lipa: Working with Madonna was 'unbelievable'

Big Bang Theory star on board for The Flight Attendant