A lack of charismatic leads, a clunky script and a boring plot gets the first instalment in the projected Star Wars: Anthology series off to a very poor start

Talk about Hamlet without the prince. Or, indeed, Star Wars without the fun or sense of adventure. This first standalone episode in the franchise is a bit of a mess, a half-baked, half-cocked rush to another box office bonanza that seems overawed by the over-arching story.

It is a brave attempt at making a new kind of Star Wars movie but seems all too eager to express its fealty to the source material without thinking up any ideas of its own. Worse of all, the dread spectre of George Lucas’ prequels can be detected once too often.

By filling in the gaps and the detail of a vast canvas, Rogue One is like a black hole sucking the mystique out of Star Wars. Lograys and Gungis, I give you Vague One: a spin-off too far.

Taking a single line from the opening crawl of Star Wars: A New Hope, it centres on plucky rebel forces (all dressed in very on-point combat fatigues) and their efforts to steal plans for the Death Star. It certainly opens with a great scene-setter. On a blasted volcanic planet, scientist Galen Erso (Mads Mikkelsen) is in hiding after being forced to work for the Empire on their ultimate new WMD.

When he is finally tracked down, he is coerced into leaving his family and returning to complete his work. All of this is witnessed by his young daughter, Jyn (played by Felicity Jones as a kind of less interesting Rey from The Force Awakens). Years later, she has grown up to become a nihilistic outlaw who finds herself recruited by her old guardian, Clone Wars veteran Saw Gerrera (Whitaker), and the Rebel Alliance to steal the design schematics of this deadly new weapon.

And so, in the grand tradition of The Dirty Dozen and The Guns of Navarone, she assembles - or is forced into - an alliance with a motley crew, including a blind Jedi swordsman, a swarthy old warlord and a turncoat Imperial pilot to steal the Death Star plans. However, none of these new characters is ever fully developed and the best lines and scenes are taken by Alan Tudyk as the hulking droid K-2SO, who resembles the Iron Giant, and who has an excellently dry and sarcastic sense of humour.

However, the potential for a spin-off story is never fully realised. Director Gareth Edwards, who made the needless Godzilla, was on the defensive from the word go after attacks from purists and he is rather too overawed by the whole project. How many panoramic panning shots of massive spacecraft and establishing shots of planets can you handle? The novelty wears thin in Rogue One. The Star Wars playbook has been left dog-eared.

Watch our interviews with Riz Ahmed and Diego Luna

Those rumours of Disney’s unhappiness at the final cut sound increasingly credible as the movie progresses. Edwards' darker vision is compromised repeatedly by tacked-on moments of forced humour and some truly bewildering longueurs involving tech problems and various scrapes and shoot-outs that serve no real purpose except to show, once again, what a terrible aim Imperial Stormtroopers have.

So thank Yoda for the forces of the Dark Side. The most fun and, at last, some genuine menace is to be had from the quasi-Nazi fiends of the Empire. Ben Mendelsohn is excellent as director of weapons research Orson Krennic, Rogue One's very own Bishop Len Brennan, but there is at least one jaw-dropping and even possibly slightly disturbing CGI trick here as one long dead Star Wars actor returns in all his crepuscular and angular angel of death glory.

Darth Vader’s return is also well handled but he is a bit player among a new cast of characters, who bravely but unsuccessfully try to expand the Star Wars universe. You will marvel at the hardware, the space battles, and the exotic settings (citadels, castellations and sweeping shots of deserts and oceans abound) but wonder about the lack of memorable heroes, heroines and dialogue. Call it Star Wars fatigue but in Rogue One, worlds of imagination are reduced to staging posts on a story that runs out of energy far too quickly.

With a cool billion expected at the box office for this opening salvo, Lucasfilm and Disney will get busy spinning Star Wars out into a new Marvel/DC style franchise, seemingly oblivious to the sanctified place the original movies hold in many people’s hearts. 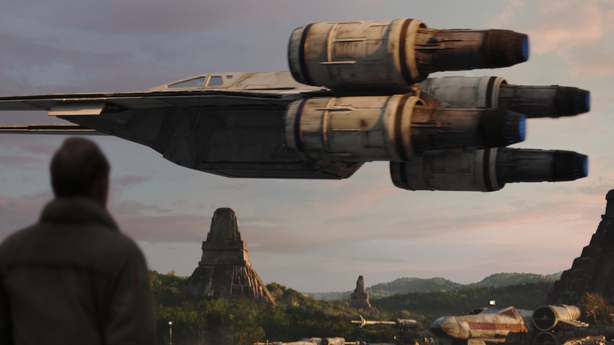 The Han Solo film has been green-lit but what next for the saga that will never die? A rom com about Han and Leila; Skywalker: Exile on Skellig?; or how about Jar Jar Binks running a bar in the Dagobah system, crying into his beer and wailing, “why does everybody hate me?”