Spotlight is essentially All The President’s Men rebooted, with the quarry being the real-life Cardinal Law and errant Boston clergy rather than Richard Nixon and his associates.

Instead of the Washington Post, it’s the Boston Globe doing the hunting down. So you get the long strip-lit office, the serious news story simmering away while the mostly male hacks rib each other about poker and golf and attend baseball games together.

The year is 2001 and a new editor Marty Baron (Liev Schreiber) has taken over.  After initial suspicions are allayed, he assembles the editorial team and gently but forcefully probes what kind of stories the journalists have been chasing down. As an outsider  -  Jewish, non-Catholic  - Baron has no residual loyalty to the city, nor indeed has he any particular appreciation of, or much interest in, the city’s Catholic clergy who are respected and admired by many seemingly well-heeled locals for their charity work.

Picking up on a column that he has noticed in the paper which refers to a priest who had been moved to another diocese in 1976, he begins to nudge the team towards taking on the church, in a way that have been hitherto reluctant to do.

In sum, the history of the Boston Globe is none too distinguished when it comes to the matter of reporting on clerical sex abuse in the Boston archdiocese. A list of 20 names of offending priests sent some years previously were ignored by the editorial team. 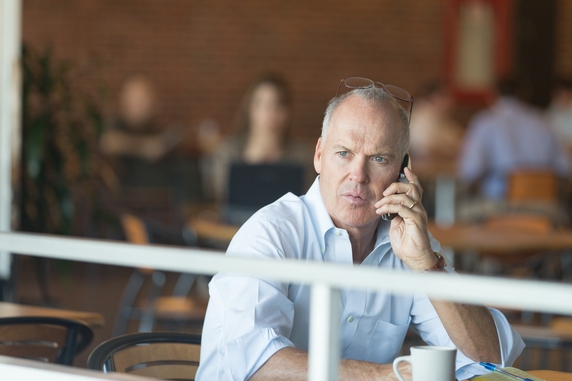 The film plays brilliantly with that fault-line in the newspaper's ethos, the sense that having stuck their heads in the sand somewhat when a story leaped up and stared them in the face, they have a chance to make amends for their apathy. The team work feverishly hard to get results, almost to prove that they are righting their own wrongs, redressing their own transgressions and failures.

Mark Ruffalo as the dogged journalist Michael Rezendes eventually secures the release of court documents which prove that Cardinal Law (smug and smarmy in a cameo by Len Cariou) has engaged in a the cover-up of over 70 priests who have abused children.

Michael Keaton, Rachel McAdams, plus the aforementioned Ruffalo and Schreiber along with Mad Men’s John Slattery as Ben Bradlee jnr are on top form as the eponymous Spotlight editorial team which unearthed the disturbing truths about the Boston archdiocese. Stanley Tucci is equally strong as the victims’ attorney, Mitchell Garabedian, whose initial bark turns out to me much worse than his bite. Behind that shouty, ill-mannered lawyer there is a man hell-bent on justice.

Spotlight is an impressive film, not so much for any particular twists or turns in the plot, which at this stage is public record, but rather for the impressive humanity and commitment of the performances from a top-notch cast.