You may already know more about legendary photographer-turned-director Anton Corbijn's new film than you realise. Have you ever seen that iconic 1954 photo of James Dean walking in the rain in Times Square? Well, the picture was taken by a man named Dennis Stock, and the story of it, and his friendship with the soon-to-be-huge star, is touchingly told in Life.

With two excellent performances from Robert Pattinson as Stock and Dane DeHaan as Dean, Life is Corbijn's most uplifting film to date, with the era so lovingly and beautifully recreated that your time with his two leading men will probably feel all too short.

Harry Guerin: Was the story of a young man trying to find his way in the world – taking you back perhaps to your own early days as a photographer – a major part of the attraction of making Life?
Anton Corbijn: Absolutely. The producer had come to me at some point, saying, 'There's a film about James Dean...' And I said, 'I'm not interested'. Months later they came back to me and said, 'Maybe you should read it – it's really a different kind of story than we actually said to you'. So I read it, and yes, that's what pulled me in: the relationship between a photographer and his subject matter. That subject matter happens to be in the public eye and happens to be James Dean. I could relate to the idea of photographing somebody in the public eye.

What age were you when you first became aware of Dennis Stock's work, and was it that Times Square photo?
It was that picture, but I didn't connect it so much with the photographer at the time, I have to say. The photograph would probably be part of my subconscious since I was in my late teens or something. I only started looking at Dennis Stock's work on a larger scale two years ago – 'Oh, that's his work'. I was very happy that he was a documentary kind of guy because it tells you so much more about the era. If he was just a portrait photographer he wouldn't have left this legacy. It's so beautiful, the picture of James Dean. Obviously, his death gave everything a different weight, but to have that documentary stuff of him at the farm [Dean's home in Fairmont, Indiana where Stock also photographed him] is fabulous. And even that photograph in Times Square – it's a beautiful image. You can read so much into it, and I guess that's why it became so iconic. 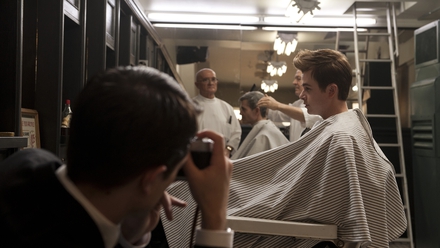 What the film does very well is show that some of the great moments in our lives are just down to luck.
Yes. The film doesn't have that big a message; it's really how life is and how you can be touched by meeting people, how things develop from that. That's it, really.

That's plenty! When you were starting out yourself, did you have moments where you felt like Dennis Stock in the film – 'This is never going to work; I'm going to have to go and do something else'?
Yes, and to be honest, I still have them! You're always doubting yourself and there's moments of elation and there's moments of despair. 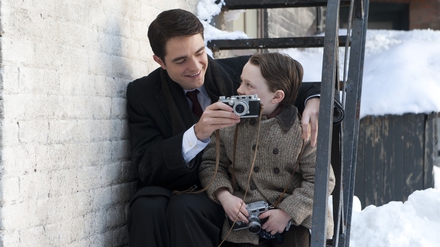 Before you started filming Life, was there one thing that you thought would be the biggest challenge? Did it turn out to be the biggest challenge, or did something else take its place?
I think the biggest challenge, really, was to get James Dean right. [With] Dennis Stock you could take a lot of liberty because he's not really on the horizon of most people's perception of photographers. James Dean is such an iconic person; he's so alive in a lot of people's minds that you really had to be very precise. That's difficult to get an actor to convince you that you're looking at this person, and I always felt that Dane DeHaan is that kind of actor. Very quickly you believe he's the heart and soul of that character. 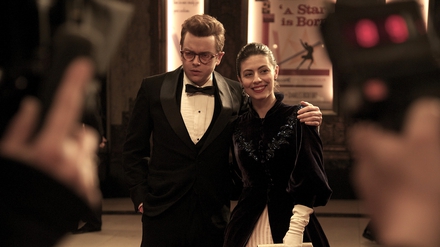 The first time you had Robert and Dane read together could you feel the electricity straight away?
They're very different actors, you know? They come in very different ways to the set or to rehearsals. That made me feel really great because they are very different characters in the film. Dane is very prepared – he prepared for months – Rob seems to be less prepared but then on set he really delivers. But in rehearsals he sort of takes it in. He's very intuitive in his approach and it worked really well, whereas Dane is much more studied.

In your research on James Dean did you find anything out that really surprised you?
Well, he was very playful. I'm not sure if I realised that about him before. I also didn't know that much about James Dean, you know?!

I didn't realise he had that prankster side to him. I had always seen him more as the tortured artist before I watched the film.
Absolutely. And, of course, that was our battle in a sense – people know James Dean because of his films. That's an actor, and we wanted to have the real James Dean. There's very little film footage of him not being in a movie.

How long did Life take to shoot?
Only 28 days. It was the shortest film I've ever done in that sense, and it was very tough. We had the coldest winter in 30 years in Toronto and some scenes were minus 28 to minus 30 degrees Celsius. 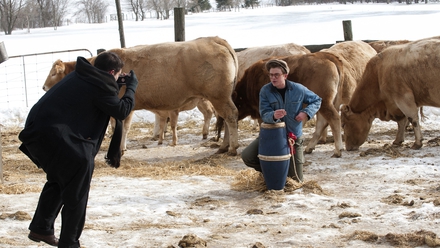 Now that you've made four movies – Life, Control, The American and A Most Wanted Man – do you find it easier being a director?
To a very small degree, yes. The territory is a bit more familiar – when I walk on a set I don't feel I'm the odd one out any more so much! I've decided that I'm going to make movies now, so I have to put my photography on the backburner. I can't do both at the same time because they're so demanding in terms of energy and time, making films. But it's an interesting adventure, so I'm grabbing it with both hands.

Life is in cinemas from Friday September 25.