The XX, A Tribe Called Quest and Duran Duran have been announced as headline acts for this year's Electric Picnic Festival. Also topping the bill is superstar DJ Pete Tong and funk-soul legend Chaka Khan.

Across the weekend Interpol, Phoenix, Run The Jewels, London Grammar, Rag 'n' Bone Man, Madness, Father John Misty and The Divine Comedy are also set to take to the stage.

Speaking to RTÉ Entertainment, festival director Melvin Benn said they are "really pleased" with the line-up for this year's festival, giving a particular nod to The XX who have "paid their dues" and earned their headline slot through their with previous performances in Stradbally.

"We're really pleased with it; it feels like there's something there [for everybody]. The whole of the Picnic spreads every age group in Ireland, I think, and the line-up is reflective of that," Benn told RTÉ Entertainment.

"Young acts like Young Fathers coming through, then Duran Duran and Tribe Called Quest, The XX making their first headline performance here in Ireland having paid their dues – they've played a number of times at the Picnic and come through the ranks on the stages and they deserve to be that headliner."

Tickets for Electric Picnic went back on sale this morning ahead of the line-up announcement, and the festival was completely sold out before the headline acts were revealed.

Benn said he was "in shock" that they had sold out so quickly, comparing the speed of sales to last year's festival.

"To be honest I'm in shock actually, it's absolutely amazing that they've gone so quickly," he said. "There was a little less than 50% left and last year it took a month or so to sell the same amount of tickets, this year they've just gone instantly. Within the first hour it was clear they weren't going to last 2 hours... It feels amazing."

Early-bird tickets to the hugely popular festival were released after the conclusion of the 2016 event, which saw LCD Soundsystem, The Chemical Brothers and Lana Del Rey headline, before going off-sale for a number of months.

Electric Picnic is always a highlight of the Irish festival calendar and Benn likened the joy of the event to the feeling of Ireland beating England in the rugby, while commending festival-goers for their loyalty to the weekend.

"The loyalty of the people to the Picnic and what we want to put into the Picnic; it says a huge amount. You know, this is an extraordinary event, as everybody knows, it's probably – apart from this weekend when you beat us (England) at the rugby – it's probably the best weekend of the year in Ireland I'd say. It feels very special, incredibly special," he added.

Electric Picnic announced the news that the all tickets were sold within 2 hours this morning. In its 13-year history Electric Picnic has never sold out ahead of the line-up release and so far in advance of the festival weekend.

All tickets for #EP2017 are now sold out, apart from a limited number of tickets available to Three customers at a later date. pic.twitter.com/NDS6tfmxao 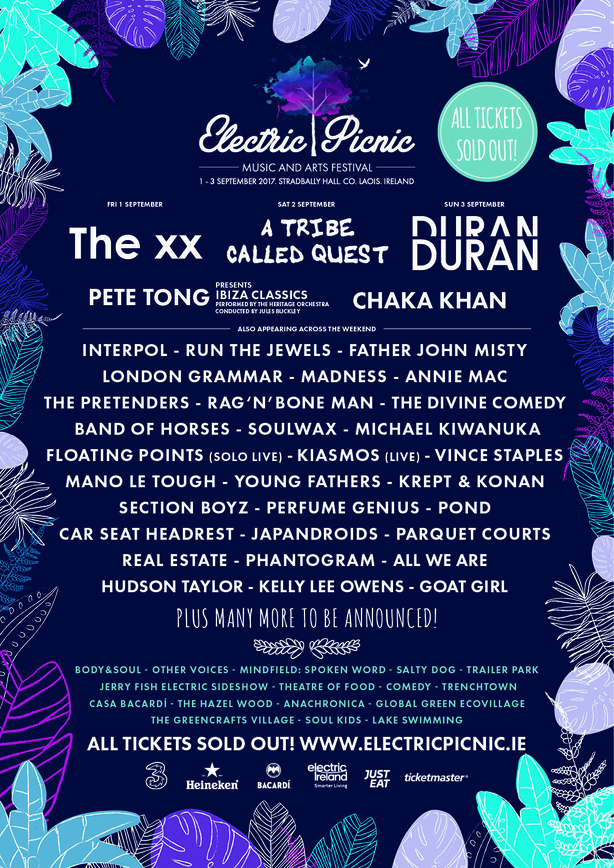