Irish composer, DJ and producer Kormac has released Equivalent Exchange, his first album since 2014, and he plays Dublin's Button Factory this Saturday. We asked him the BIG questions . . .

Equivalent Exchange is released his new imprint, Always the Sound, a collaboration between Kormac, All City Records and CWB Management. The vinyl edition ready for shipping this January.

In his 15 years career of sonic adventurism, Kormac has released two albums, played hundreds of live shows and worked on TV and film soundtracks. 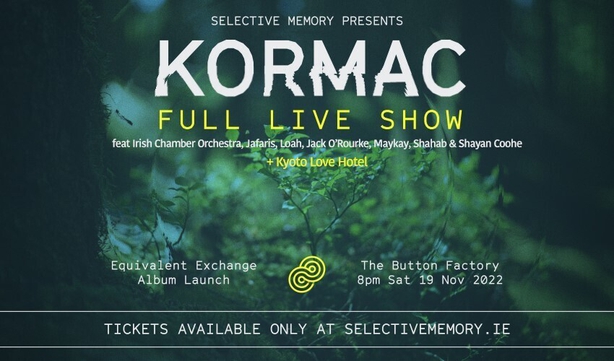 I'm a producer, composer and performer living in Dublin. I produce make music for dancefloors, vinyl and TV/film soundtracks. I'm married to Triona and we've a lovely three-year-old boy, Ryan.

Electronic music made from acoustic sources. I'm, probably, best known for playing dancefloor music at clubs and festivals, while brining live musicians into the mix. This could be anything from a vocalist to a 30-piece orchestra. I think the music I write for TV/film - mostly drama and thriller scores - is a bit different, more experimental. What I write in this case really depends on the plot and/or characters I'm writing for.

Too many to mention but if I had to pick three, say; Sonic Youth, Jurassic 5, GoGo Penguin. Sonic Youth had a massive influence on me growing up as they were just SO different to anything else I'd ever heard. I was fascinated with how they tuned their guitars so strangely and played them with drumsticks and screwdrivers! If you've never listened to them before, start with an album called Daydream Nation.

Guns N' Roses at Slane Castle (with my Dad). I think it was a pretty special first gig to go to! They opened with Night Train. I'd never seen or heard anything like it.

On vinyl, I think it was either a Sebadoh album or Foo Fighters' first single.

Quiet Corners of My Mind by Romare - lovely combination of samples and electronic elements. His work on the Ninja Tune label is also well worth checking.

I'm going to, shamelessly, plug one of my own tracks, Always The Sound here. The lyrics were lifted from a poem written by my late mum and sung beautifully by MayKay so I'm going with that!

Graduation in Zion by Kiddus I. It's a reggae classic I never tire of. If you've seen the seminal reggae movie, Rockers, you'll know this (If you haven't, you really should!).