The contents of a converted garage that regularly played host to rock legends such as George Harrison and Ronnie Wood are expected to trigger a wave of excitement among music fans when they go up for sale.

The garage in Chatham, Kent, was the workshop of Britain's premier guitar-maker, the late Tony Zemaitis. 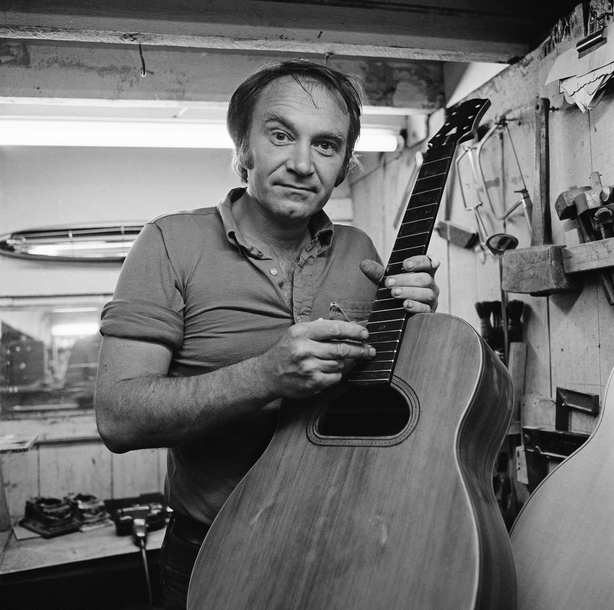 While Zemaitis shunned the limelight, his distinctive guitars have been used by some of the biggest names in the music world and continue to be much sought-after by collectors and musicians alike.

Among the lots from Zemaitis's workshop are documents, books, tools, his work bench, memorabilia and wall panels covered with photographs and designs.

Letters from George Harrison and even one of Harrison's own sketches for a guitar are expected to attract heavy bidding.

Born in Tottenham of Lithuanian descent, Zemaitis was originally a cabinet maker who used his skills to craft some of the most iconic acoustic and electric guitars ever created.

In 1969, he built an oversize 12-string acoustic guitar for Eric Clapton called Ivan the Terrible, reputed to be the biggest of its kind in the world.

His instruments have been played on stage by Mick Jagger, Keith Richards, Mike Oldfield, Donovan and Bob Dylan among others. He died in 2002.

Auctioneer Luke Hobbs, from Gardiner Houlgate auctions in Corsham, Wiltshire, said: "This is a unique sale and we're estimating the items could fetch in the region of £20,000 to £30,000.

"Tony's workshop is virtually a shrine for guitar fans. Tucked away in this quiet, suburban street, he produced some of the finest guitars this country has ever seen.

"I'm surprised the council hasn't put up a blue plaque on it. Some of the most famous rock stars in the world visited Tony there."

Zemaitis developed an ornate engraved metal shield and pearl inlays for the front of his electric guitars. Both made them very desirable for on-stage use.

Zemaitis's son, Tony Zemaitis Jnr, said: "We're incredibly proud of what dad achieved and don't want the contents of his workshop, which has remained untouched since his death, to just disappear.

"The auction is a way for people who loved dad's work to have something of his."

Recalling his father's famous visitors, he said: "I might come home from school to find Bobby Womack in the workshop, or George Harrison would arrive unexpectedly in his Porsche 944 then compare notes with dad, who had the same model car.

"At other times, I'd find various rock stars in the kitchen enjoying mum's homemade pizzas. Our neighbours had no idea who was visiting."

Limiting his production to maintain quality, the high demand for Zemaitis guitars in the 1990s led to his instruments changing hands for £20,000 each on the second-hand market and the manufacture of fake Zemaitis guitars.

The auction will take place on 8 December.