The In Bruges dream team of Brendan Gleeson, Colin Farrell and writer/director Martin McDonagh have reunited for The Banshees of Inisherin, a tale of two old friends who fall out over art and donkey poo on an island off the west coast of Ireland.

McDonagh is back mixing dark humour, the surreal and the diabolic in a movie that has echoes of his acclaimed plays The Cripple of Inishmaan and The Lieutenant of Inishmore. 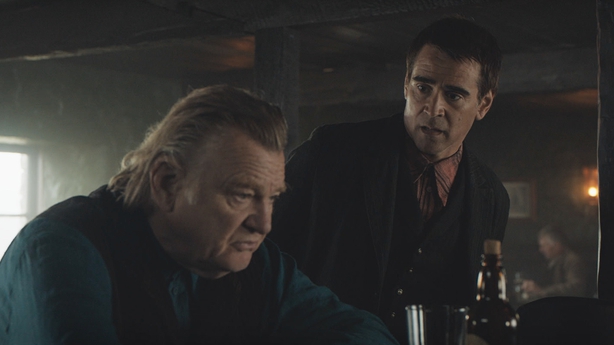 Farrell plays the nice but dim Pádraic and Gleeson is Colm, a more cultured figure who is desperate to leave a legacy as he feels his mortality weighing down on him.

Watch the full interview with Farrell and Gleeson above.

One day, out of the blue, the older man calls an end to his friendship with the hapless Pádraic and it sets in train a series of events that unsettle the whole island as a the civil war rumbles on on the nearby mainland.

Speaking about the movie, Farrell told RTÉ Entertainment, "You read it first and you’re laughing and people watching the film are laughing as well but Martin brings you to some dark corners.

Review: The Banshees of Inisherin

Just like the civil war, it is a story of entrenchment turning into savagery.

"It’s an indication of how a certain core value can be assaulted and that can lead to entrenchment and the collateral damage that can come from that," Gleeson says.

"But I have a learning, as they say in the rugby world, about this movie. I used to think that Siobhán was the only person speaking sense up to a point when she talks about `your piddling differences’, and `you’re all boring’.

"The more I got involved in the civil war thing from the voiceover I did for RTÉ, I began to realise what the oath to a sovereign meant in terms of declaring loyalty to something that you’d kill people over trying to free yourself from.

"It touched a nerve, and I began to understand for the first time that it wasn’t just a question of pride or stubbornness.

"It was about the central core identity that you have to keep a grasp on so Colm’s need to create is a life-or-death situation. He’s in a place of desperation and his survival is dependent on him having the headspace to create but the damage he causes is very much out of proportion."

Asked if he had ever had a friendship come to a sudden end in his own life, Farrell said, "I’m lucky at the age of 46 not to have lost a great friendship and I’m lucky to have also had some great friendships. I’m blessed. But I have lost people I love though time and mortality.

"That sense of loss, my experience as a human of 46 is infused with that loss and it’s also infused with the inevitable loss I’m going to experience in life as well so yeah, McDonagh’s work is so provocative."

The Banshees of Inisherin is in cinemas now