Cardi B has pleaded guilty to two misdemeanour charges in a New York court, avoiding jail time in a deal that closes a years-long case alleging her involvement in a strip club brawl.

On August 29, 2018, Cardi B was in the Angels Strip Club in Queens in New York when her group reportedly lobbed bottles, chairs and a hookah pipe, which police said bruised a female employee's legs.

Cardi B allegedly ordered an attack on two sisters working at the club because one of them slept with her husband, the rapper Offset.

The superstar rapper's admission of guilt to assault and reckless endangerment allows the mother of two to avoid a trial and potential jail time. The 10 other charges she faced were dismissed.

The artist who was born Belcalis Almanzar arrived at the courthouse wearing a fitted white dress with matching Louboutins and her signature extra-long nail extensions.

The two misdemeanours will be conditionally discharged as soon as Cardi B completes 15 days of community service. She must also pay court fees, and stay away from the two women who made the accusations for three years. 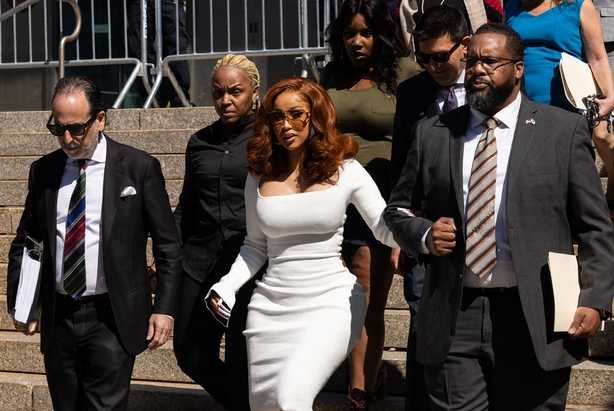 Returning to her luxury SUV following the proceedings, the rapper, asked how she was feeling, quipped to reporters that "I'm feeling like I look good."

The swift denouement followed four years of back-and-forth between her legal team and state prosecutors. The proceedings were drawn out, like so many court cases, by the pandemic.

Then in June 2019, a grand jury indicted Cardi B on charges including two felonies. If convicted, she faced jail time.

The rapper invited Drew Findling - the so-called #BillionDollarLawyer who has made a name for himself representing hip-hop stars in Georgia, and more recently was hired by Donald Trump to represent him in an election interference probe - to join her legal team.

On Thursday Findling was all smiles, sporting his signature Wayfarer sunglasses as he let reporters know he was wearing an Armani suit with Versace shoes.

"She'll be able to move on," he said of Cardi. "There are too many things that she has planned for her family, for her career, and for the community, and she just felt quite honestly that a three-week jury trial was going to be a distraction from the things that we felt were most important."

Asked about the lengthy legal process, his fellow attorney Jeff Kern told reporters "it's like anything else in life."

"Like doing your term paper in college, you get it done at the last minute," he said. "Nature of the situation, nature of the beast."

Cardi B must complete the community service by January 2023 or face jail time.