London is set for a fiery awakening as the premiere for the forthcoming Game Of Thrones prequel series, House Of The Dragon, is held today.

Based on George R.R. Martin's book Fire And Blood and set two centuries before the events of Game Of Thrones, the new series chronicles the beginning of the end of House Targaryen and the events leading up to the Targaryen civil war, known as the Dance of the Dragons.

Stars and creators of the show will walk the red carpet in Leicester Square, ahead of the show's launch on Sky and streaming service Now from August 22.

The HBO drama features a star-studded cast, including The Crown's Matt Smith as Prince Daemon Targaryen, younger brother of King Viserys and heir to the throne, while Olivia Cooke plays Alicent Hightower, the daughter of Otto Hightower, hand of the king.

Also in the line-up are Emma D'Arcy, who plays Princess Rhaenyra Targaryen, the king's first-born child, who is of pure Valyrian blood and a dragon rider, and Steve Toussaint is Lord Corlys Velaryon, known as the Sea Snake, a famed nautical adventurer who has built his house into a powerful and wealthy seat.

It will also star Paddy Considine as King Viserys Targaryen and Rhys Ifans as Otto Hightower.

Ahead of the show's premiere and launch, Eve Best, who plays Princess Rhaenys Velaryon in the new series, revealed that the actors had gone through an unusual casting process to get their roles.

The King's Speech star told The Observer: "Everything was very secretive. To audition, we were initially sent a scene from the original Game Of Thrones with the names changed. We weren't even told the title of the new show."

She added that when she was eventually sent a real script, she "loved the writing", saying a particular line stuck out to her.

"There is a line my character says early on: 'Men would sooner put the realm to the torch than see a woman ascend to the Iron Throne'," she said.

"Lose the word Iron from that sentence and it feels all too relevant." 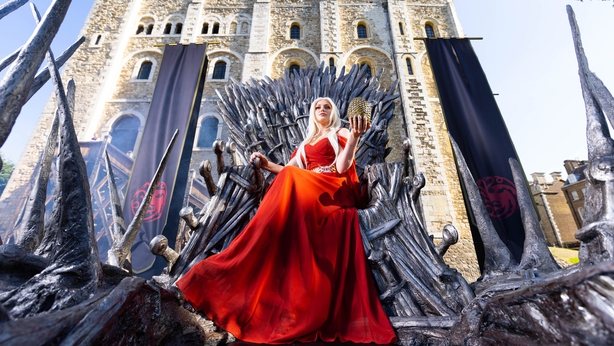 Last week a replica of the Iron Throne from the series was erected outside the Tower of London. It then began a tour across Britain, visiting locations including Cardiff and Edinburgh throughout August.

George R.R. Martin is co-creator and executive producer of the series.

House Of The Dragon will air on Sky and streaming service Now from August 22.