The UK city chosen to host the 2023 Eurovision Song Contest will be selected in a "two-stage process" against requirements that assess the city's "capacity and capability", the BBC has said.

The event's organisers, the European Broadcasting Union (EBU), previously decided the event could not be held in Ukraine as a result of the Russian invasion.

This was despite the country's 2022 entry Kalush Orchestra triumphing at this year's competition in Turin, Italy, where the UK's Sam Ryder was runner-up.

In a recently published Q&A, the BBC - who broadcast the contest in the UK and will make the selection alongside the EBU - have specified that the host city will be chosen using a two-stage selection process.

Once all the applications have been received a process will take place whereby cities will be shortlisted "based on their ability to meet the requirements and their responses around capability and experience".

Detailing the requirements the host city must meet in order to be considered, the BBC said: "The final decision on selecting the host city will be based on a city or region's capacity and capability in meeting the BBC's and the EBU's requirements, as well as availability of resources and general experience in hosting a large and complex event such as the Eurovision Song Contest. 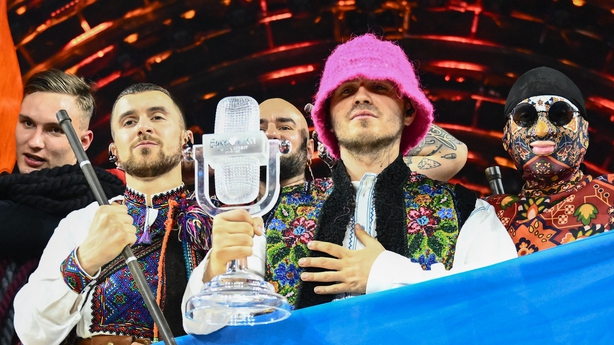 "For example, last year the EBU's host city criteria was based on providing a venue able to accommodate at least 10,000 spectators (as well as a press centre), that should be within easy reach of an international airport and with ample hotel accommodation."

The broadcaster also said it may "consult" the UK Government on the decision, but the host city will ultimately be decided upon by the BBC and the EBU.

London and Manchester are among the cities who have placed bids to host the contest.

Announcing London's bid, mayor Sadiq Khan said the city was "ready and willing to step in" with a contest that "celebrates the people of Ukraine and shows off the very best of Britain".

Sheffield City Council was also among the first to announce a bid, saying on Twitter: "We've told Eurovision we'd love to host... watch this space."

Leeds City Council said it makes "total sense" for them to host next year as they will be the city of culture for 2023.

Two of Scotland's largest cities, Glasgow and Aberdeen, have also announced they will be vying to host the contest in 2023.

After initially bidding to host the event, Cardiff withdrew its request as Cardiff Council, the Welsh Government and the Principality Stadium released a joint statement announcing they had been exploring the viability of bringing the song contest to the capital of Wales but will not proceed due to the "complexity of staging the event".

Welsh Conservative member of the Senedd Tom Giffard, the shadow culture minister, criticised the withdrawal, saying it shows a "lack of ambition" from the Labour government and asked if other Welsh cities had been considered.

It will be the ninth time Eurovision has taken place in the UK - more than any other country.

Ukraine will automatically qualify for the grand final alongside the so-called big five nations - the UK, France, Germany, Italy and Spain, who each get a free pass because of their financial contributions to the event.

The host city is expected to be announced by the autumn.