Thousands of Nicki Minaj fans have been left disappointed after she was forced to leave a planned meet and greet in London after being mobbed by fans outside the venue.

Superfans had flown from across the world to watch the rap superstar, 39, take to the stage at Wireless Festival on Sunday at Finsbury Park but some did not make it in as the gates were closed early due to overcrowding issues. 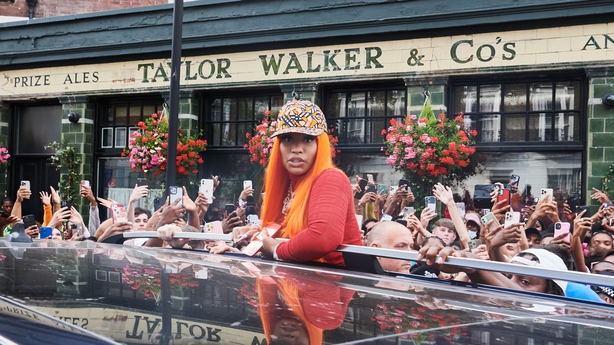 Hours after the event, Minaj announced she would be hosting a spontaneous meet and greet at Cafe Koko in Camden on Monday which prompted crowds of adoring fans to arrive at the venue from the early hours of the morning in hope of catching a glimpse of the singer.

She initially told her 198 million followers on Instagram that she would arrive at 12pm, this was later pushed back to 2pm and when she tried to enter the venue just before 6pm police had to form a wall around her as masses of fans rushed to see her.

Police had to escort Minaj back to her vehicle before she could enter the venue.

The rapper later wrote on Instagram: "My babies I love you all so much.

"Thank you to the officers for helping us so much today."

Ahead of her attempted arrival, a select number were allowed into Cafe Koko after a few hours while thousands more queued outside in the more than 30C (86F) heat in the hope of seeing the rapper.

Among the crowds was Imenella, 34, from Sweden, who flew with her friend to the UK to see the rapper perform at Wireless on Sunday.

However, due to their flight being delayed they arrived at the festival at 6pm and were not allowed in despite having a ticket as the gates had been closed early due to overcrowding issues which caused dozens of police officers to be deployed.

Imenella described the situation as a "disaster" recalling how some fans jumped the fence to get into the venue.

She told the PA news agency: "When the first song came (on) we were standing outside, I just started crying, I was so sad."

The Swedish fans had hoped the meet and greet would make up for missing out at the festival and added that they would not return to a Wireless festival again after their experience.

The rapper's much-anticipated headline set was also delayed by 30 minutes and had to finish abruptly at 9.30pm due to curfew laws.