As he took to the Pyramid Stage on Saturday night, the former Beatle became the festival's oldest solo headliner, a week after he celebrated his 80th birthday.

To mark the momentous occasion, McCartney treated the masses in the crowd to a selection of his own songs as well as beloved tracks by The Beatles and from his later group Wings.

During his more than two hour set, he played a range of classic song including Hey Jude, Blackbird, Live And Let Die, Ob-La-Di, Ob‐La‐Da and Get Back.

The electrifying show was further amplified as he introduced Grohl to the stage to sing I Saw Her Standing There and Band On The Run.

The Foo Fighters frontman revealed he had flown in from the US especially for the appearance, but admitted that the journey was not without a few bumps as he had multiple flights cancelled but noted he would "never miss being on stage" alongside McCartney.

Following Grohl, McCartney announced he had another surprise all the way from the east coast of America as Springsteen took to the stage.

After the US rocker wished Mccartney a happy 80th birthday, they played Glory Days and I Wanna Be Your Man.

McCartney also remembered his nearest and dearest during the headline set including dedicating a piano-led version of My Valentine to his wife Nancy and Something to his Beatles’ bandmate George Harrison.

Ahead of the song Here Today, he revealed he had written it after John Lennon died, describing it as a "form of a letter" which he never got to write to his bandmate as he said when they were kids they "couldn’t express too much affection for each other" as they were "too busy trying to be hard and dead cool".

As the song ended, he added: "If you want to tell someone you love them, don’t wait, don’t put it off."

Elsewhere in the set, McCartney delivered an energetic guitar solo after playing Let Me Roll It.

Following the rendition, he explained that he adds that section at the end as a tribute to the "late great Jimi Hendrix". 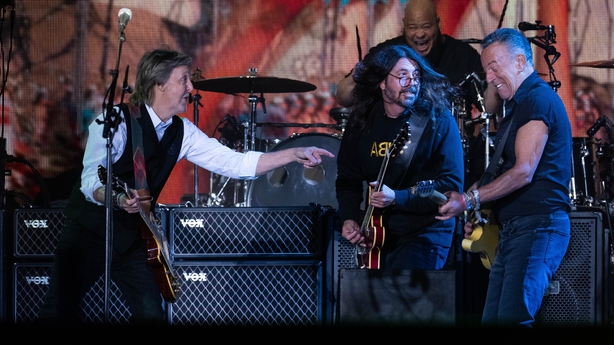 He also recounted a fond anecdote about Hendrix, recalling how he put his guitar out of tune while covering the Beatles’ song Sgt Pepper’s Lonely Hearts Club Band, causing him to ask guitar maestro Eric Clapton who was in the audience to help fix the instrument.

During the story, McCartney briefly paused to allow festival staff to check on a situation in the crowd and resumed after he was informed it had been sorted.

After finishing his main set with Hey Jude, the crowd chanted the famous lyrics back to the singer until he returned for an encore. 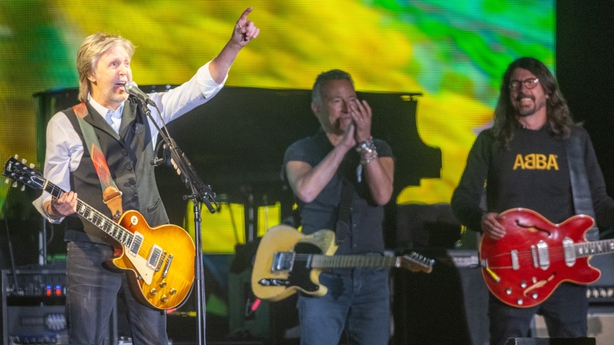 When he came back to the stage he was waving the Ukrainian flag while members of his band flew a rainbow Pride flag and the Union Jack.

As part of the encore, through special technology which could isolate Lennon’s vocals from old recordings, McCartney was able to duet The Beatles’ track I’ve Got A Feeling alongside his former bandmate on the Pyramid Stage.

To end the historic set he sang the Beatles’ song The End to a cheering crowd with Springsteen and Grohl also returning to provide guitar solos.