Róisín Murphy, Mogwai, CMAT and Pillow Queens are among the acts who will play the Body & Soul festival this June at the Ballinlough Castle Estate in Co. Westmeath.

The festival sold out its early bird tickets before the headline acts were announced and halved the capacity of the event to 5,500 people. 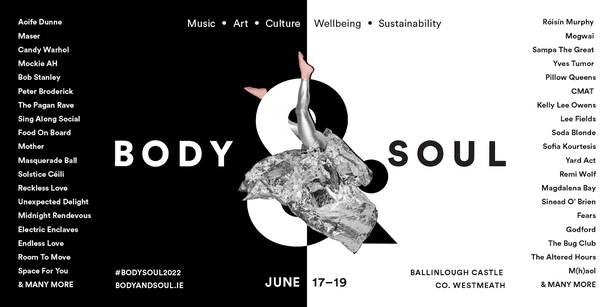 The weekend will also include an immersive audio playback for Jon Hopkins’ Music For Psychedelic Therapy, Saint Etienne’s Bob Stanley on The Birth of Pop, art from Aoife Dunne, and a foraging walk and Siesta Time With Peter Broderick.

Róisín Murphy will perform tracks from her fifth solo album Róisín Machine on the Saturday night, and Scottish post-rock band Mogwai, who marked their 25th anniversary last year, will perform on Sunday night.

Dublin artist CMAT, whose debut album, If My Wife New I'd Be Dead, flew to the top of the Irish charts recently.

Further line up announcements will be made for this year’s Body & Soul, which also features a programme of late-night parties and DJs, art installations, pop-ups and performances.

Since 2010, the festival has previously played host to Nick Cave and The Bad Seeds, Solange, St. Vincent, and Goldfrapp.