The Academy of Motion Picture Arts and Sciences said that its board of governors has initiated disciplinary proceedings against actor Will Smith for slapping presenter Chris Rock at the Oscars ceremony.

The Academy said that following the incident, Mr Smith was asked to leave the ceremony but he refused.

"Things unfolded in a way we could not have anticipated," the Academy said in a statement. "We also recognise we could have handled the situation differently."

The group said action may be taken at its next board meeting on 18 April.

That may include "suspension, expulsion, or other sanctions," the statement said.

Earlier, it pledged to take "appropriate action" over the incident.

The group is under pressure to do something in response to the slap, which was seen by millions around the world, overshadowing Hollywood's most important night of the year.

In a letter sent to Academy members, the leadership of the body that awards the Oscars said it was "upset and outraged" over the incident.

"Sunday's telecast of the 94th Oscars was meant to be a celebration of the many individuals in our community who did incredible work this past year," said the letter, signed by President David Rubin and CEO Dawn Hudson.

"We are upset and outraged that those moments were overshadowed by the unacceptable and harmful behaviour on stage by a nominee."

Attendees at the ceremony watched on Sunday as Smith stormed onstage and hit Rock, who had cracked a joke about his actress wife's closely cropped hairstyle.

Jada Pinkett Smith has alopecia, a condition that causes her to lose hair.

The audience was initially unsure if the powerful slap was part of a skit, until Smith shouted profanities from his seat.

Rock managed to keep the gala on track, but the atmosphere at the event had shifted unmistakably.

Moments later, Smith won the Oscar for best actor, giving a tearful speech in which he claimed: "Love will make you do crazy things." 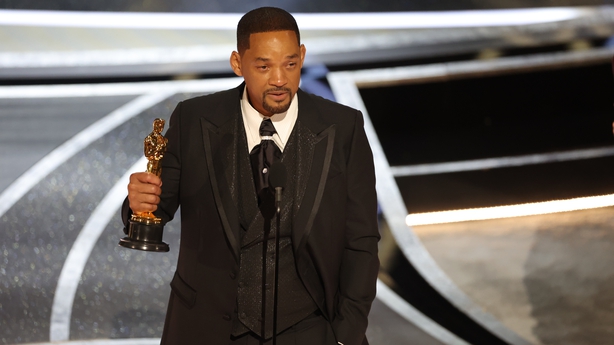 Smith subsequently apologized to Rock in an Instagram post, but the Academy remains under pressure to censure him.

"To be clear, we condemn Mr. Smith's actions that transpired Sunday night," the letter to members said.

"As outlined in our bylaws, the Academy's Board of Governors will now make a determination on appropriate action for Mr. Smith.

"As governed by California law regarding members of non-profit organizations like the Academy, and set forth in our Standards of Conduct, this must follow an official process that will take a few weeks."

Trade title Variety reported that the board would be meeting on Wednesday. A spokesman for the Academy declined to comment on the report.

Rock, who has not spoken publicly since the episode, was due to perform to a sold- out crowd in Boston later Wednesday.

Tickets for the show were being advertised on secondary markets for hundreds of dollars above their face value.

Ticketing site TickPick said Monday it had sold more tickets for Rock's tour in the preceding 24 hours than in the whole previous month.