Hollywood A-listers held a moment of silence at Sunday's Academy Awards to show support for the people of Ukraine in the face of Russia's invasion, after much speculation about how Tinseltown would handle the issue.

Many were calling on Oscars organizers to do something to acknowledge the situation, but others feared the moment could be perceived as too preachy.

A series of slides appeared on the giant screen at the Dolby Theatre. 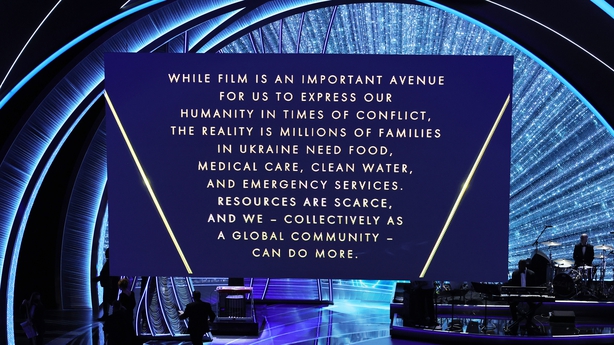 "We'd like to have a moment of silence to show our support for the people of Ukraine currently facing invasion, conflict and prejudice within their own borders," the first one read.

"While film is an important avenue for us to express our humanity in times of conflict, the reality is millions of families in Ukraine need food, medical care, clean water and emergency services. Resources are scarce and we - collectively as a global community -- can do more," the next screen read.

"We ask you to support Ukraine in any way you are able #StandWithUkraine". 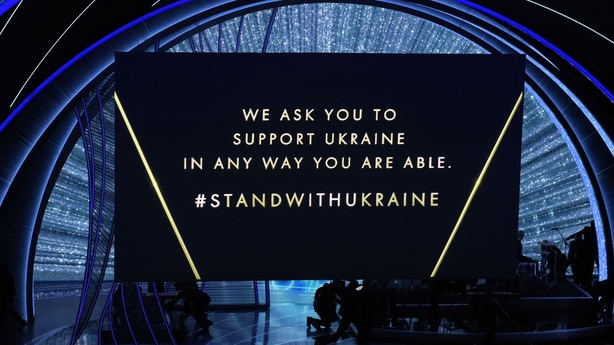 The war in Ukraine, which has been raging since Russian President Vladimir Putin's troops rolled into the country on 24 February, has seen millions flee, hundreds of civilians killed and cities pummeled.

Actress Mila Kunis, who was born in Ukraine and spent part of her childhood there, touched on the topic while introducing a musical performance by Reba McEntire, without mentioning Ukraine by name.

"Recent global events have left many of us feeling gutted, yet when you witness the strength and dignity of those facing such devastation, it's impossible to not be moved by their resilience," Kunis said.

"One cannot help but be in awe of those who find strength to keep fighting through unimaginable darkness."

For others at the ceremony, the solution appeared to be wearing blue ribbons bearing the hashtag #WithRefugees.

The campaign, backed by the UN refugee agency (UNHCR), got support from nominated songwriter Diane Warren, who wrote the song "Somehow You Do," which McEntire performed.

Jason Momoa added a pocket square in the colours of the Ukrainian flag to his all-black ensemble.