David Beckham has handed control of his Instagram account to a Ukrainian doctor working in the city of Kharkiv.

The former footballer, who has 71.4 million followers on the social media site, said he wanted to highlight the "amazing work" of medical staff operating amid the Russian invasion.

Iryna, who is head of the regional perinatal centre and a child anaesthesiologist, posted clips and images to the sportsman’s Instagram Stories throughout Sunday, showing how the war had affected the work of her team.

"Today I’m going to show you how we work in times of war and who we have become during these war days," she said.

Iryna shared videos showing a basement where pregnant women and new mothers were evacuated to during the first days of the invasion, an intensive care unit where babies are being treated and oxygen generators donated by Unicef. 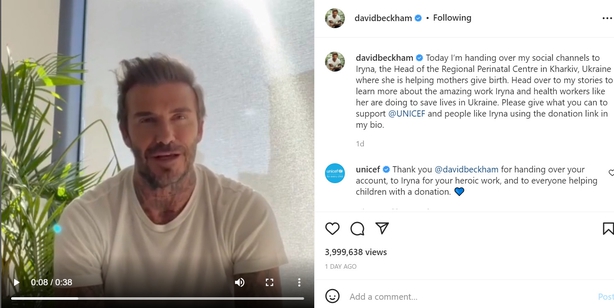 Iryna, identified only by her first name, said she now works "24/7" and that, "We are probably risking our lives, but we don’t think about it at all. We love our work."

She also posted about Yana and her baby son Mykhailo, who was born on the second day of the war with breathing problems, and whose family home was destroyed during the fighting.

She said the child was "better now".

Former Manchester United and Real Madrid player Beckham, 46, has been an ambassador for Unicef since 2005.

He urged his followers to donate to the charity, which is working in Ukraine to provide families with access to clean water and food, ensure child protection services continue and assess the refugee situation in neighbouring countries.

"Thanks to your donations, the oxygen generators they have received are helping newborns survive in appalling conditions," he said.

Kharkiv, Ukraine’s second-largest city, has been the target of Russian attacks for some three weeks.