Hailey Bieber has confirmed she has recovered completely after being admitted to hospital for a small blood clot in her brain which she described as one of the "scariest moments" she has ever been through.

In a post to her Instagram story, the 25-year-old model recalled how she began experiencing "stroke-like symptoms" while having breakfast with her pop star husband Justin Bieber on Thursday morning.

She confirmed that she was now home and "doing well" while thanking the doctors and nurses who looked after her.

She wrote in the post: "On Thursday morning, I was sitting at breakfast with my husband when I started having stroke-like symptoms and was taken to the hospital.

"They found I had suffered a very small blood clot to my brain, which caused a small lack of oxygen, but my body had passed it on its own and I recovered completely within a few hours.

"Although this was definitely one of the scariest moments I've ever been through, I’m home now and doing well, and I’m so grateful and thankful to all the amazing doctors and nurses who took care of me!

"Thank you to everyone who has reached out with well wishes and concern, and for all the support and love – Hailey." 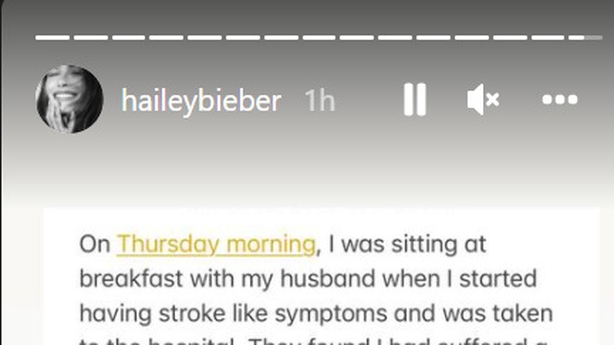 The model recently celebrated her husband’s 28th birthday by sharing a collection of intimate photos of them together and saying that the "most beautiful" part of her life is spending it with him.

The couple tied the knot in a secret ceremony in New York in 2018 when Justin was 24 and Hailey was 21.

They exchanged vows for a second time in South Carolina at the end of September 2019.