There was bad news for former RTÉ newsreader Aengus Mac Grianna on Sunday night when he and his dance partner Emily Barker were eliminated from Dancing With The Stars.

Following the exit of comedian Neil Delamere and author Cathy Kelly, Aengus became the third celebrity to leave series 5 of the show after he and Emily performed an Anchorman-themed jive.

They scored 17 points and some very positive comments from the judges but unfortunately his efforts were not enough to see him through to next week's show. 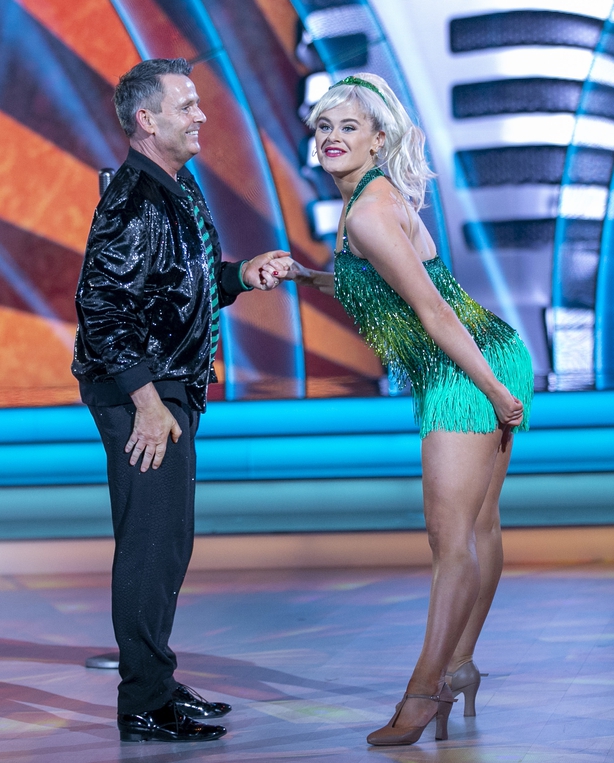 After the results were announced, Aengus said: "I had a fantastic time." And when asked if he was surprised that he was out of the contest, he said, "no!"

His partner was full of praise for him: "He was brilliant. He’s never danced before in his life and he was very memorable."

The celebrity dancers brought their 'A’ game to the Dancing with the Stars dancefloor on Sunday night as each of the ten couples fought to earn their place in next week’s Dedicated Dance week, at the end of which, there will be no elimination. 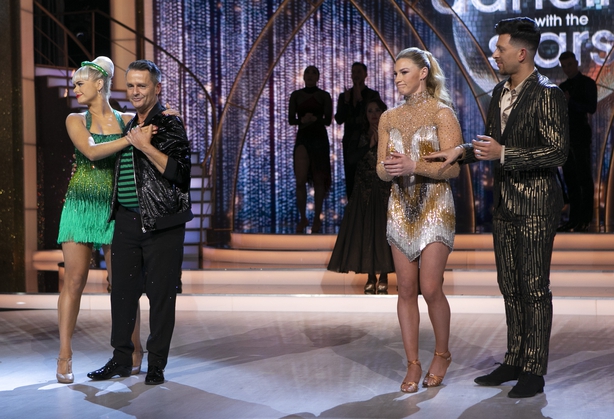 Presenters Jennifer Zamparelli and Nicky Byrne were on hand to greet them after their performance while judges Loraine Barry, Brian Redmond and Arthur Gourounlian provided critique along with their scores.

After she became the first dancer this series to achieve 10 points last week, Singer Erica Cody was the first celebrity to take to the dancefloor with her pro-partner Denys Samson with a sultry rumba to Girl on Fire by Alicia Keys.

Loraine began the judges' comments by saying: "A raw rumba, no frills, but…you dressed it up with the arms, legs, basic action, fan position - outstanding rumba."

Arthur said, "Can someone pass me the fire extinguisher? That was hot! That’s how you open the show!"

Erica and Denys scored 26 from the judges.

Cyclist Nicolas Roche, along with his pro-partner Karen Byrne were the second couple to dance. Nicolas danced his second Latin routine of the season, a samba, to Fantasy by Earth, Wind and Fire.

Arthur said, "I wanted to be transported to the carnival….I wasn’t, but you were committed to the character tonight."

"Last week you glided, but bit of a puncture tonight," Brian said. "Some of the technical actions were a bit flat, so technical improvement needed, but keep the party going."

Loraine added: "Technically way off the mark, but emotionally, definitely on the mark. I applaud that, but technically not up there.

Nicolas and Karen scored 15 from the judges.

Aslan’s Billy McGuinness and Hannah Kelly were the next couple to dance. They brought a fun holiday atmosphere to the dancefloor with their quickstep to A Town Called Malice by The Jam.

Brian said, "A Town Called Malice . . . some people would say I like a malicious comment - but not tonight! The arms need work, but great energy, great characterisation, yes, job done."

"May I say for a man of 61…it’s incredible. The two times you went down the floor, once open, once closed, that is quickstep, a little bit of swing. A good night for you tonight." Loraine said.

Arthur added, "I’m so happy, the happy face is back. Quickstep - you never let me down when you are having fun. This was quickstep extravaganza."

Billy and Hannah scored 18 from the judges.

Loraine said: "Useful tango - stalking action with circle. You need to get hip line slightly forward, slight up. You’ve got it. Give us more."

Brian added: "Tango of two halves. Top half excellent, spine and head position. You need to tidy your feet a bit. Bit of a swan of a tango. A very good attempt."

Missy and Ervinas scored 22 from the judges.

Matthew MacNabb and Laura Nolan were the fifth couple to dance tonight. Their salsa was to X by the Jonas Brothers feat. Karol G.

Arthur: "Those lifts, I thought I was watching the Olympics." You need to loosen up. I applaud you for it."

Brian: "I agree with Arthur. Lifts were great. You should have but more lifts in, as sometimes it wasn’t great in between. You can’t always get hip action. Not a salsa without it."

Loraine: "The Saving grace were the 2 L’s - Laura and lifts. You have to have hip action. Those hips are not moving as they should for a salsa. Good effort, but not good enough."

Matthew and Laura scored 14 from the judges.

It was an upbeat Latin cha-cha-cha for Nina Carberry and her pro partner Pasquale La Rocca tonight. They danced to 'If the World Just Danced’ by Diana Ross.

Brian: "I thought the first section was excellent. Leg action was bit forced. Everything else was there. You need to start believing in your legs. A blast from start to finish."

Loraine: "It’s the smile tonight - a lovely cheeky smile - a little mistake, but you still had a great effort – lovely swivel actions. A tremendous effort."

Arthur: "So good to see a different side to Nina - the cha cha - the best number for to show us. Legs a little bit open but we had fun."

Nina and Pasquale scored 21 from the judges.

Aengus Mac Grianna and Emily Barker performed a fun jive to Billy Joel’s All Shook Up.

Loraine: "Totally in the zone there, in your element. Used prop really well. Twinkle toes - a little bit. A good jive."

Arthur: "Dancing is so much fun and so hard. Jive never stops. You never stopped. You danced your socks off. Bravo."

Brian: "It was athletic, agile, light on its feet. Didn’t get all shook up like last week. All looking up this week."

Aengus and Emily scored 17 from the judges.

Swimmer Ellen Keane and Stephen Vincent danced contemporary ballroom tonight. Their emotional dance resonated with Ellen as they danced to We are Beautiful by Unsecret X Lyra.

Arthur: "Such an emotional performance. I was so captivated by you. No greater feeling in the world then feeling like you are in the moment, in the music. You are a dancer. You are Beautiful."

Brian: "Well Stephen, you spun down those steps. Ellen - the odd leg line, where foot extension could have been better. But people often ask why people dance? I understood why. Arthur said you’re beautiful. This was beautiful." 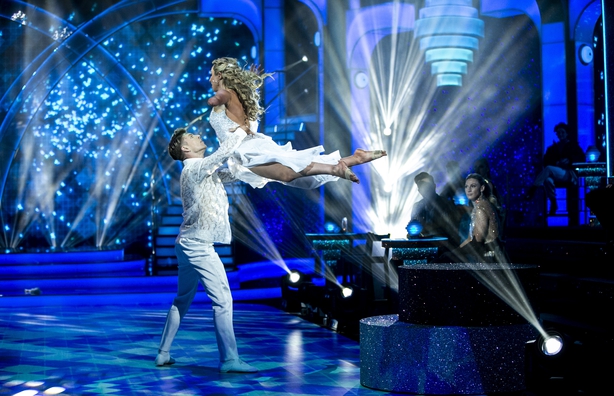 Loraine: "A beautiful but heartfelt message. You took off that sleeve and took off. Both sides equally matching. Sensational."

Ellen and Stephen scored 27 from the judges.

After another break, it was the turn of presenter Gráinne Seoige and John Nolan who brought American Smooth to the dancefloor. They danced to Cheek To Cheek by Ella Fitzgerald.

Brian: "Great to see you back to full health and fitness. One tiny mistake but you turned elegance back on. Your best dance yet."

Loraine: "Swing, swag and swosh and you had 75% of it. Let shoulders go. You had a little bit of foxtrot and quickstep. John was in his element."

Arthur: "You had a hard week last week. You picked yourself up and what a comeback. Tonight it was smooooooth."

Gráinne and John scored 19 from the judges

The last couple to dance tonight were rugby player Jordan Conroy and Salome Chachua. They closed the celebrity performances with a moody paso doble to Paint it Black by Escala.

Loraine: "I feel this was tailor-made for you. Paso and dark. Working with the cape. You were so so close. It was a powerful and bold paso doble.

Arthur: "Incredible cape work - bravo. For dancing you have to gave the full package. Head, legs, face. You had it all."

Brian: "As far as paso dobles go. Butch as a builder’s breakfast. Congratulations Salome on the choreography. Leg lines a little bit weak at times, but a great job and off you go."

Jordan and Salome scored 27 from the judges

The remaining nine celebrity dancers will dance next Sunday evening in which their Dedicated Dance will be extra special to them and dedicated to important figure in their lives. No couple will be eliminated at the end of next week’s show.

The Dancing with the Stars Official Podcast presented by Lottie Ryan is available on RTÉ.ie/podcasts, Spotify or Apple Podcasts.

Tonight's eliminated couple will be interviewed on The Ryan Tubridy Show on RTÉ Radio 1 tomorrow morning.