Actor and musician Kiefer Sutherland has said the days he spent in prison for drink driving were humiliating and that it felt as though there was a flashing light above his head saying, `idiot'.

The 55-year-old 24 and Young Guns star, who is the son of Donald Sutherland and the late Shirley Douglas, was arrested four times on DUI charges between 1987 and 2007, the year he spent 48 days in jail.

Sutherland has just released his new album Bloor Street, which is named after a major thoroughfare in Toronto, and he appeared on RTÉ Radio 1 arts show Arena on Wednesday evening to talk about his life and career.

Asked by presenter Kay Sheehy about his new song County Jail Gate, which features the lyrics "two tonnes of steel grinding on wheels", he said, "That’s how heavy those gates are and sadly I can tell you I’ve seen more than one.

"Clearly by the time you’re in this position you know you’ve done something really stupid. You’re humiliated and embarrassed and nothing brings it home more than when that gate begins to screech - it makes an awful noise, and the buzzers start flashing and all the guards are attentive so that nobody ever accidently walked out." 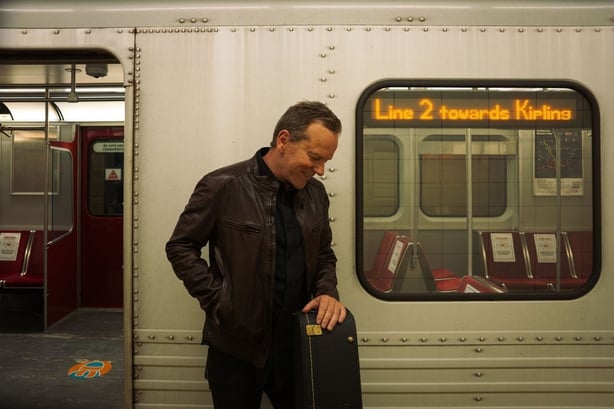 Sutherland, who got his first leading film role in the Canadian drama The Bay Boy in 1984, added, "It’s awful and everything slows down. It’s like there’s a flashing light above your head that says `idiot’ and there is just nothing cool about it. There’s a line on that song that says, `wasted time is on my mind because this ain’t no way to live’.

"Those are the reflective moments you have in that situation where you think, `this can’t happen again, I can’t allow this to happen again’ and you need to do something to straighten your life out and luckily for me I have a great support network with family and friends, and I made some adjustments.

"I think for me writing that song was really important because there comes a time when you have to put it behind you. You can’t wear it everywhere you go and beat yourself up to a pulp. It’s been fifteen years and somehow writing that song helped me put it in an envelope and send it on its way."

Bloor Street is out now on Cooking Vinyl