McFly star Tom Fletcher and his professional dance partner Amy Dowden danced their final dance in the Strictly ballroom this week and are out of the running for the coveted glitterball trophy.

They were joint bottom of the leaderboard after performing their couple's choice routine to On My Own from Les Miserables on Saturday's live show.

Fletcher had dedicated the performance to his younger sister Carrie Hope Fletcher, who is a West End actress currently playing the lead in Andrew Lloyd Webber's Cinderella, to show he is a "proud big brother".

However, the judges felt he had been too restrained with his emotions during the dance.

The judges were split on their decision after Stephenson and Xu reprised their jive to Footloose from the musical and movie of the same name, but they were saved by winning the majority vote.

Broadway star Cynthia Erivo, who was filling in for Craig Revel Horwood on the judging panel after he tested positive for Covid-19, said: "This was really tough, I think both couples did such a beautiful job, but there was just an edge in this couple's dance.

"I really enjoyed it, thank you both for doing what you did, but Rhys and Nancy I choose you."

Motsi Mabuse also chose to save Stephenson and Xu, adding that this was the "toughest" dance-off she has seen since joining the BBC One show but felt the CBBC host and his partner "put on another extra level".

Fellow judge Anton Du Beke added: "I agree with the other judges, it was an outstanding dance-off. On Saturday night Rhys made a slight mistake and Tom didn't really fulfil his potential in the dance.

"Tonight, both couples danced exquisitely but just a very slight edge goes to Rhys and Nancy."

Due to the majority vote, Fletcher and Dowden were already confirmed to get the boot from the competition, however, head judge Shirley Ballas said she would have voted to save them instead. 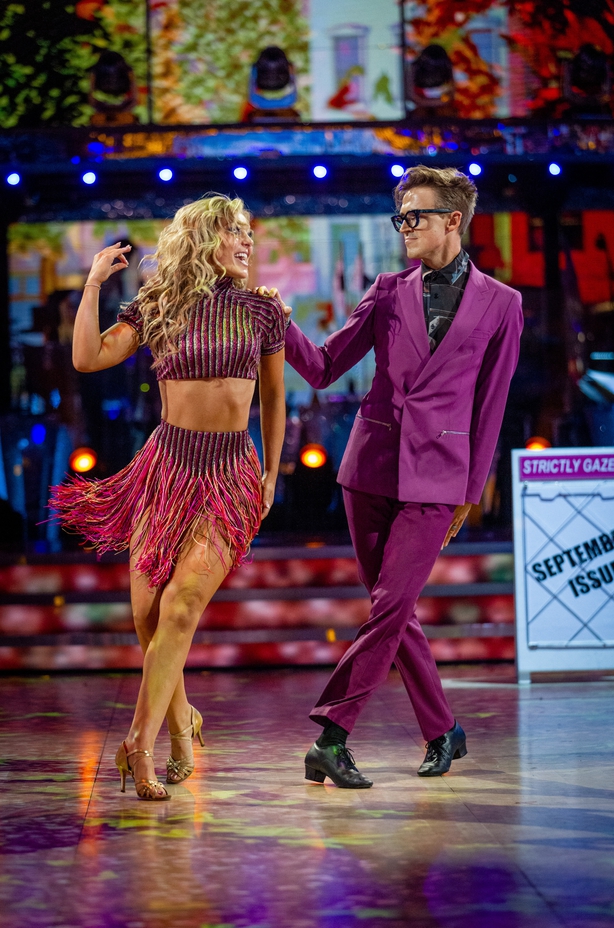 Fletcher admitted he was "gutted" to leave but said he had the "best time" and had "loved every second of it".

He added: "I've made the best friend in Amy, you've been amazing - thank you so much for teaching me how to dance, I know it was a struggle at times.

"It's an amazing show, everyone that works on it, all of you guys have been amazing, I've loved getting to know you."

"Thank you so much, it's been the best experience and I don't regret a single minute of it."

The McFly singer and guitarist, who has three sons with author Giovanna Fletcher, said he hoped they were proud of him, adding: "They've loved learning to dance. That's the thing, Amy hasn't just taught me, she's taught my kids."

Dowden said: "Tom has given his all, and he is so humble, so genuine, so talented.

"The whole Fletcher family, they welcomed me in with opened arms and honestly I couldn't have wished for a better time. These memories are going to live with me for the rest of my life, and I'm telling you this now, the Fletchers are not getting rid of Amy."

Strictly Come Dancing returns on November 27 at 6.55pm, with the results show on November 28 at 7.20pm on BBC One.