Westlife have said they want to put on "their biggest and best show ever" as they announced an extensive Ireland and UK tour in 2022, kicking off at the Aviva Stadium in Dublin on July 8.

Speaking at a press conference on Friday morning at the Aviva, the Irish boyband said they felt "so honoured" to be taking to the road with The Wild Dreams Tour next year. As well as the Aviva, the band will also play already sold-out headline shows at London's Wembley Stadium and Cork’s Páirc Uí Chaoimh.

Band members Shane Filan, Nicky Byrne, Mark Feehily and Kian Egan spoke about their excitement at going on tour after such a long period of not being able to perform. 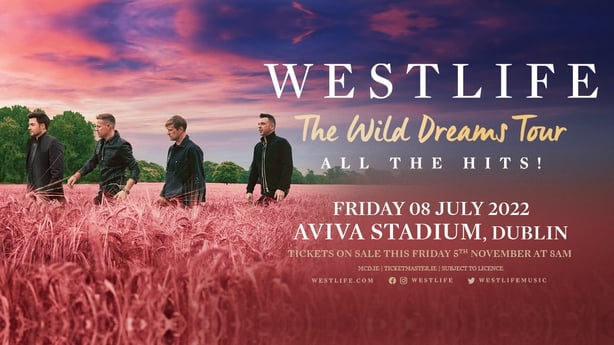 Byrne said it felt like "a momentous occasion" to even be able to announce the Aviva show next summer.

"It just feels so positive that we're moving forward, and we're getting to a place, particularly for the Irish music scene, that shows can come back," he said.

"The fact that we're getting back on stage, getting back into rehearsals, that normality is resuming - it makes us feel brilliant. We've done enough gardening in lockdown and 2k walks that we can do!

"To be able to go back to a live show like this is phenomenal. It will be over three years, over a thousand days, since we did Croke Park in 2019 on the reunion tour."

Feehily continued: "This is bigger than all of us really, this moment, it is a Westlife moment but it's also much bigger than that.

"We didn't want to do anything until we knew it was safe and right and putting on the type of gigs that we're lucky enough to be able to put on is not easy. We're excited to be able to celebrate everyone being back together.

"It's a luxury in a way to to a gig, but at the same time it's part of our heart and soul as people in Ireland. I can't wait to see the faces on people back at gigs and to see them enjoying themselves."

Egan added: "After such a long period we just feel honoured to still be able to do it and to be the ones people want to come and see."

When asked what can fans expect, Filan said they hope to outdo anything they've ever done.

"We feel our last Croke Park show was the best show we ever put on, and we want to top that now and make it very interesting.

"It's going to bring you through the 22 years of Westlife, we want to make it a very exciting show. We want to put on our biggest and best show ever."

The band have promised "some spectacular shows" which will include will all of their most loved hits, including Swear It Again, Flying Without Wings and World of our Own, as well as new tracks from their upcoming album Wild Dreams, and some "special surprises".

Westlife had a record-breaking reunion tour in 2019 where they played to over 600,000 fans across 27 countries.

They have just released their new single Starlight, the first track from their highly-anticipated new album Wild Dreams, which is available for pre-order now.

Tickets for The Wild Dreams Tour go on sale on Friday, November 5 at 8am from Ticketmaster.ie.