Keith McErlean, who plays Con Doyle in RTÉ crime drama KIN, has dismissed criticism of the show, and said that the half a million viewers who enjoy the series can handle the portrayal of Dublin gangland.

Speaking during a press interview on Friday, the former Raw and Bachelors Walk actor said of people who claim that KIN glamourises Dublin criminals, "Watch something else, try another channel, try Netflix. Don't watch it - but there are half a million people watching it.

"But it’s on at 9.30pm. There are certainly things in it like sex and violence and drugs and all sorts of things that are already on TV now. We thought Irish people would be scared of that, but didn’t they love it on Love/Hate?

He added, "I don’t see what the issue there is really. People who don’t want to watch the show or who think it’s a disgrace, watch something else. There are plenty of other channels. The 500,000 people who do like KIN, they’re alright. I think they can take the violence and the whatever."

However, he said that KIN was very different from Love/Hate.

"It’s inevitable that people are going to make comparisons, but they are two different shows. Other than criminality and being set in Dublin, that’s it.

"What they both have in common though is that Kin and Love/Hate are both well written, well-acted shows."

In tonight’s episode of the tense drama about two Dublin crime families at war, things begin to get very serious for Con as his desperate game begins to hit him where it really hurts.

"There’s an unwritten rule in this game that women and children should not be involved, and they should never be harmed or brought in any way," McErlean says. "It’s frowned upon and in the real world it’s frowned upon. It’s just a line you don’t cross.

"And of course, these lads, they took out Jamie at the beginning of the show and that was a retaliation thing as well, but Jamie was a mistake. It wasn’t supposed to happen, it was an accident.

"The reason why they’ve taken Con’s son is that he is not involved in the business in any way and Con has kept him away from it and has never wanted him to get involved. 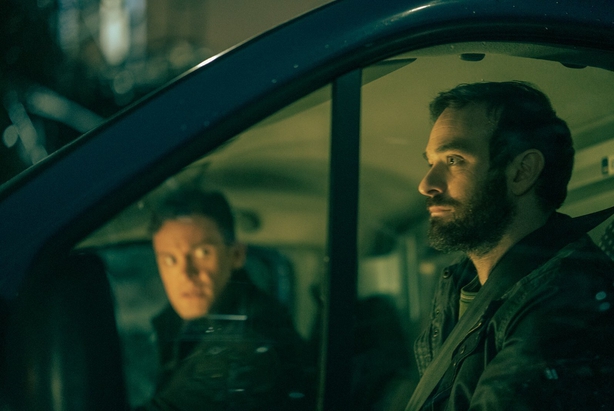 "A line has been crossed and they are in deep water now. Women and children are just a no-go area here. It’s just something you do not do."

He added, "It shows you how desperate the Kinsellas are that they would do something like this. Because it’s an unwritten rule in the real world of gangsters that women and children should never be involved or brought into this world. It’s a line you don’t cross."

The way things are going for Con, viewers may wonder if he’ll be back for a second or third series.

"It’s one of those shows where you really don’t know who is going to make it out," says McErlean. "We’ll have to see. Ciaran Hinds character is an extremely intimidating man.

"Eamonn has no idea of the amount that was stolen from him. He thought it was a bag of drugs and it turns out it’s all the drugs, all of it. I think that came as a bit of a shock to him."

It’s 20 years since McErlean, a native of Carndonagh in Inishowen, first played the gormless but loveable Barry in Bachelors Walk and after living in London and the US for ten years, things have come full circle for him now that he’s living back in his native county.

And after 15 years apart, McErlean has teamed up with his two Bachelors Walk co-stars, Simon Delaney and Don Wycherley, for what he calls "a pandemic play"- a three-hander production of Art by French writer Yasmina Reza, which will be performed next week without an audience.

Reflecting on his recent work, the actor said, "Working with friends has been the most rewarding. If you’re able to do good work and good writing but also to work with people you like so they were the highlights, really.

"Getting to work with John Carney again on Sing Street and more recently on Modern Love was great, where he brought the three bachelors back together that was great."

KIN is on RTÉ One at 9.30pm tonight with catch-up on RTÉ Player.