A Belmullet-bound Bill Murray joined Kathryn Thomas on the Ray D'Arcy Show on RTÉ Radio 1 on Wednesday as he continued his Irish golfing adventure.

Murray is in Ireland with author Tom Coyne to film a new series of the golf show The Links Life, with Wednesday the second day of their nine-day trip.

"We talked about it a lot and we felt like so many Irish were forced to emigrate to America that we should try to return the favour and get some people coming back," the Ghostbusters star explained.

"Some of these people are going to be your problem in just a matter of days."

"We've got four of my six - now five - brothers are here," Murray continued. "Three of my six sons are here, three of my five nephews are here, one of my brothers-in-law."

"How good of a golfer are you?" asked the host.

"You don't ask someone, like, how much money they earn, or are you seeing anyone else," Murray quipped.

"But how good? I'm good enough. I was better, and yesterday I was not so good, but then late yesterday I became quite a bit better."

Murray then said he was handing the phone over to another one of his travelling companions, former US Poet Laureate Billy Collins.

"If people are driving their cars right now I'd like you to pull over to the side of the road rather than risk any kind of emotional outbreak that might involve a collision and some sort of legal action," the actor instructed.

After Collins read his eight-line poem No Time, he handed the phone back to Murray, who said: "I can't tell you how lucky you are to have the Poet Laureate of the United States Billy Collins read a poem for you - and how lucky you are that he read a short one! That was the Lord's mercy! There's a gentle rain of praise falling upon you, all of us, for that."

Thomas then gave Murray some advice on how best to enjoy a packet of Tayto and asked him would he still be in Belmullet by Friday, as she would be in the area.

After some deliberations on the bus, he replied: "We'll be away - we'll be in Denmark."

Bill is chatting to @gokathrynthomas somewhere in the middle of the country now! 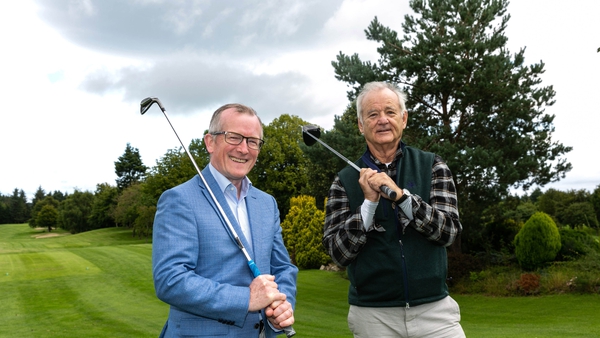