The ashes of Hungarian-born actress and former beauty queen Zsa Zsa Gabor have been buried in Budapest - nearly five years after her death at home in Los Angeles aged 99.

Her last husband, Frederic Prinz Von Anhalt, told the gathering of friends and family that he carried an urn with three-quarters of her ashes to Budapest, and that the rest of her remains will stay in Los Angeles, according to the Hungarian news agency MTI.

"This is not a burial but a celebration of her life," said Anhalt alongside Gabor's favourite yellow and pink flowers as a Roma band played at the burial ceremony.

The pair married in 1986, making it by far the longest of her nine marriages.

"Zsa Zsa was the first true celebrity, a Hungarian diva for whom the American Dream really happened," said the actress Eva Vandor, who voiced Gabor in Hungarian in her movies distributed in her homeland.

Born into a wealthy family in Hungary on 6 February, 1917 as Sari Gabor, Zsa Zsa Gabor was a former beauty queen who won Miss Hungary in the 1930s.

Her resumé after emigrating to the United States before World War II included a long list of film roles in such hit movies as Moulin Rouge, Lili and Arrivederci Baby!.

Like her famous great-granddaughter by marriage Paris Hilton, she was among the first celebrities to be famous for her celebrity.

Gabor, who had been in and out of hospital since a hip replacement in 2010, had several close brushes with death in the last years of her life.

A 2002 car accident left the actress partially paralysed and wheelchair-bound. She also had a stroke in 2005. One of her legs was partially amputated.

Von Anhalt told AFP in December 2016 that Gabor had passed away at home, after suffering a heart attack. 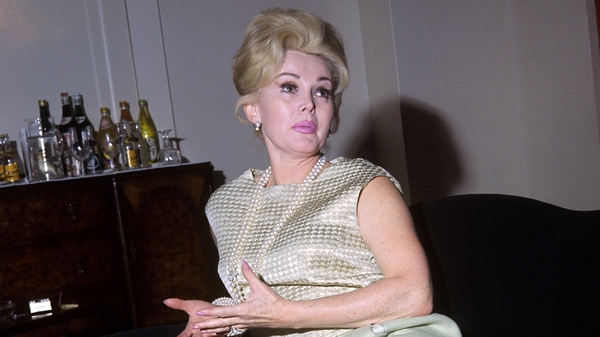