Moby has released a new album and a new biographical documentary. He talks to Alan Corr about addiction, the wild success of his album Play, and THAT Natalie Portman story.

Listen to the full interview by clicking on the audio link above for part 1 and below for part 2.

"You can't fix emotional issues with external things like fame and money," says Moby. "If you could, Kanye West and Trump would be the happiest people on the planet."

Moby, the dance boffin who made the most successful electronic album of all time, that would be the 20 million-selling Play, knows all about trying to find happiness through oblivion. He was the soundtrack to a thousand nights out and nights in twenty years ago and since then he has quietly slipped out albums to a more selective audience and of late become the author of two very confessional and controversial memoirs. But more about Natalie Portman later...

Speaking via Zoom from his hillside home in Los Filez in the shadow of the iconic Griffith Observatory in California, the 55-year-old New Yorker is in a talkative and chipper mood. Clean and sober since 2008, he tends to lapse into what he calls "pretentious grad student" talk but these days the diminutive techno monk of the hallucinogenic nineties is more of a nerdy professor given to therapy speak. Or as he says himself, "I'm just a weird bald guy."

He has just released Reprise, a new album of orchestral reworkings of some of his best-known songs, featuring vocals from the likes of Kris Kristofferson, Gregory Porter, Skylar Grey, and Mark Lanegan.

Naturally, it will bring us all back to Play, the album that made him famous, rich and, well, addicted to drink and drugs and Moby, who learned classical music as a child before chucking it all when he heard The Clash on the radio when he was 13, is more than happy to revisit those days of wild success.

"I just wanted to drink the worse alcohol in the crappiest dive bar I could possibly find. I used to go to this dive bar near my house and it was the worst dive bar in New York and that was my favourite place to get drunk."

"I thought Play was going to be this weird little record, but it kept becoming more successful," he tells me. "So when I played Glastonbury in 2000 there were 100,000 people in the audience, the sun was setting, it was just so beautiful and I had Joe Strummer dancing on the side of the stage with Bez and one of the guys from Oasis. I thought to myself at this moment things have worked out."

The mournful Play, which alchemised one of America’s oldest forms of music, the blues, with one of the world’s newest, EDM, was a planet-eating phenomenon. At one point, it was selling 200,000 copies a week. Reprise is his 14th album since then and he has never zapped the zeitgeist in quite the same way but Moby, a man who began his career DJing to people nodding out on methadone, isn’t remotely saddened by this.

Along with the release of Reprise comes Moby Doc, a new film that takes a bizarre, deconstructed approach to his life story, from his troubled childhood growing up with his single mother in Harlem and later Connecticut, where he was the poorest person he knew.

In the film, Moby dresses up as a French film director and directs his friends in re-enactments of scenes from his childhood, there are dramatizations of his therapy sessions, talking dogs, and he recreates his father’s death in a drink driving accident when Moby was just two using puppets. Death himself makes an appearance, but it may be more Woody Allen and Bill and Ted’s version of Death than Bergman’s.

The film asks a lot of existential questions, but it does so in a very surreal way, and it does not gloss over his struggles with drink and drug addiction. As he says in Moby Doc, his first acid trip lasted 15 hours. The ensuing panic attack lasted six months. After the staggering success of Play, Moby very quickly became a complete rock `n’ roll cliché, downing pints of straight vodka and ingesting industrial amounts of drugs. He freely admits to reveling in the seediness of it all.

"I just wanted to drink the worse alcohol in the crappiest dive bar I could possibly find. I used to go to this dive bar near my house and it was the worst dive bar in New York and that was my favourite place to get drunk."

However, salutary and sobering Moby’s words are about his days as an addict, everything seems to circle back to Natalie Portman. Moby Doc doesn’t dwell on it, but the story seems to follow him around like an acid flashback.

In his second memoir, 2019’s Then It Fell Apart, Moby claimed to have had a brief relationship with Portman after they met at a gig in Austin, Texas in 2000. When she heard about this, she was rather perplexed. "I was surprised to hear that he characterised the very short time that I knew him as dating because my recollection is a much older man being creepy with me when I had just graduated high school," she told Harper’s Bazaar.

Since then Moby has been asked about Portman a lot. In fact, before this interview, I was asked by his management was I going to ask about Portman. It wasn’t an issue, I was told, Moby just wanted to be prepared.

Getting him to explain what he thinks happened is not without a fair amount of, well, grad student-speak. In one recent interview he said that there were too many layers to it to explain and when I ask him about Portman, he goes right ahead and adds some more layers. Was he so out of it at the time that he doesn’t actually remember the circumstances?

"I wasn’t that type of addict. Not many of us are the best judge of our own memories and our ability to remember accurately but it was only towards the end of drinking and doing drugs that I actually blacked out. One time I was at a birthday party and I decided it would be a good idea to drink two pint glasses of vodka in 15 minutes and that was enough to create an actual blackout. Regarding not remembering things accurately, no, because I was a drunk but all of those experiences, I talk about in the book I was actually sober when they happened."

However, the story lingers, and Moby, who initially issued a full apology, nearly became the victim of cancel culture. It reminded him of some pretty nasty experiences. "I have been attacked publicly so many times," he says. "In 2002, 2003 somebody on a website said they hated me so much that they were going to stab me to death and watch me bleed in front of them so I now have a rule - I don’t read reviews, I don’t read articles about myself, I don’t read comments, I don’t watch myself on TV so I have almost no awareness of how I’m perceived by the public. As we all know you cannot explain yourself to the mob of the internet."

By the time he decided to quit drink and drugs, he had a new neighbour in New York. David Bowie moved in across the street from his apartment. They became friends and ended up touring and holidaying together. Naturally, Moby was pinching himself the whole time.

"Do you know that classic scene in Wayne’s World when Wayne and Garth meet Alice Cooper?" he says. "For a minute they’re trying to hold it together and they fall on their knees and start saying `we’re not worthy!'. That’s how I felt every second I was with David Bowie. We spent so much time together, we went on tour together, we worked on music together, we had holidays together, we hung out with Lou Reed and watched TV together.

"It wasn’t even in the realm of possibility that he would even know who I was so every part of it was magical and amazing but if you said to me that it turns out it never happened, it was just a weird mescaline trip in the desert, I’d believe you."

Half an hour talking to Moby is like therapeutic self-flagellation for him (he says that every time he does an interview he feels as though he should wire his payment over to the interviewer) and he never tires of the prostration and expiation he seems to have to go through.

Naturally, this lifelong animal rights activist and eco warrior is articulate and persuasive about the ongoing pandemic and has some sobering and clearly argued ideas of how we should prepare for whatever plague is coming next. 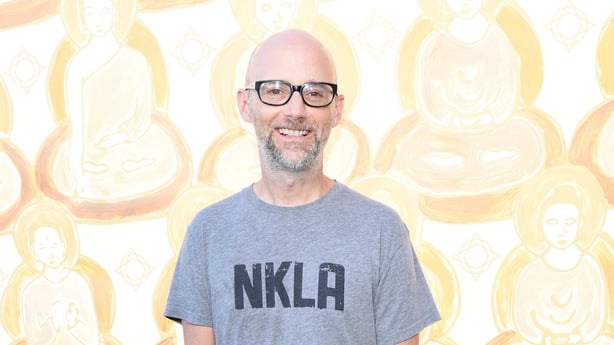 Moby hasn’t been in a romantic relationship in five years, has no children, and lives a monastic life alone in California. He’s sober, famously vegan, he goes hiking in the mountains near his house and does yoga. He is "pragmatically celibate".

In his own parlance, he has, he hopes, secured the right "existential portfolio". "Boy! There’s so many ways to look at it and the pretentious grad student in me wants to say, well there’s the quantitative versus the qualitative but rather than annoy you or anyone reading this, I'll say I think I’ve landed in a place where I’ve found a degree of lightness and happiness.

Reprise is out now on Deutsche Gramophone. Moby Doc is available to stream.

If you have been affected by any of the issues raised in this article please see RTÉ’s list of helplines.