Ryan Tubridy has saluted the "breathtaking" generosity of Late Late Show viewers, announcing that they have donated nearly €20 million to charities featured on the programme since the pandemic began.

On his RTÉ Radio 1 show on Monday morning, the host reflected on the Late Late Show Daffodil Day Special that saw over €3m raised for the Irish Cancer Society's work.

Fair play to @PlanetJedward for shaving off their famous quiffs for the Irish Cancer Society ??????

"It was one of those programmes... I don't know if I can explain to you the atmosphere in the studio on Friday night. It was so emotional and so glorious and joyful despite the obvious sense of sadness that comes with the story of cancer.

After losing both his parents to cancer in only 9 months, @ShaneFilan
shares with Ryan how they both miss phone calls to their dads.#LateLate

"But the money kept rolling in. [We] Keep hearing this, 'People are fed up'. And yet, they keep giving. It is astounding. Since this pandemic, the viewers of the Late Late Show have... I imagine lots of you listening watch the programme... We're now touching nearly €20 million - imagine that - from people at home who should be fed up to the point that they couldn't be bothered donating to charity or can't afford to donate to charity.

"I got some gorgeous messages on Instagram from people over the weekend who said, 'Look, I'm going to have less in my shopping basket this week because I had to donate €25 on Friday night, and I'll be less something in my kitchen cupboard, essentially'. That blew my mind, that level of kindness and altruism."

"The Irish Cancer Society people were on to us over the weekend," he continued.

"They are saying: 'You need to know how much this means. You need to know what this is going to do. Those incredible night nurses, the funding of those buses that travel around the country bringing people to appointments - you need to know'. So, I'm passing this on.

"I'm passing you on the gratitude and I'm passing you on the information that all those €25 and €10 and for the people who said, 'Yeah, I'll be down a couple of things this weekend' - you have made a sacrifice that will actually go to good, and make a difference. So, be aware of that. We are grateful as a programme as well, all the people who pulled that show together, and everyone who took part."

"There's a lot of kindness out there that gets lost in the noise of the angry," Tubridy concluded.

We're absolutely overwhelmed by the amazing support for the #LateLate #DaffodilDay show & are thrilled to share that viewers have raised €3m!

We can't thank you enough for your kindness & support for those affected by cancer – Ireland has wrapped them in a blanket of yellow ?? pic.twitter.com/dMsFjcCo0U

"It's great to feel that positivity, that sense [of], 'Yeah, of course everyone is fed up and tomorrow these restrictions, they're kind of Mickey Mouse lifting of restrictions'. We're thinking, 'Another six [weeks], can we do another six weeks?' Let's face it, we're all feeling it.

"But then you see this: €3 million for [the] Irish Cancer Society. That's got to be a pep in your step about us as a people, that we just keep going, keep giving. It's breathtaking." 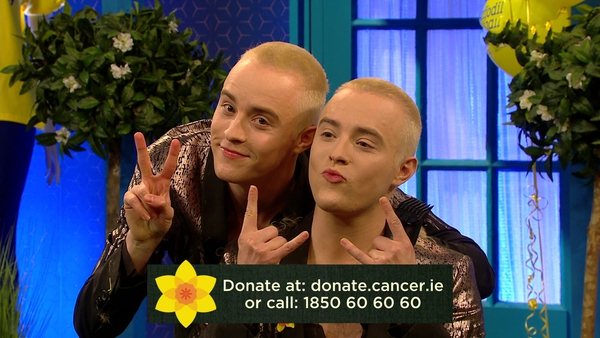 It's a close shave for Jedward in support of Daffodil Day