Irish animation Wolfwalkers has been nominated for an Oscar in the Animated Feature Film category.

Wolfwalkers tells the story of a young apprentice hunter and her father as they journey to Ireland to help wipe out the last wolf pack.

But everything changes when she befriends a free-spirited girl from a mysterious tribe rumoured to transform into wolves by night.

Speaking to RTÉ Entertainment shortly after the Oscar nominations were announced, Ross Stewart, one of the directors of WolfWalkers, said: "It's a bit of a relief. There were so many people who had fingers crossed for us, so it's a relief now that we have the nomination.

"It's brilliant that we are up there against the likes of Pixar and Disney and all of the greats."

Stewart added that they couldn't be more appreciative for all of the support and well-wishes they have received.

"That's one of the great things about Ireland, if someone is doing great in a sport or in the arts, the whole nation gets behind them and cheers them on. It's really great.

Thank you to @TheAcademy members for #WolfWalkers nomination in the Animated Feature Film category. Congratulations to @tommmoore & @rossstewart.art, the whole team involved in the production & our coproduction partners Melusine/Studio 352. https://t.co/mOZWgo7VSD

"Especially in Kilkenny too because Kilkenny has won a lot of All-Irelands and is really good at hurling. Every time we get a nomination they keep on going 'Ah, this time you'll win it lads,'" he laughed. 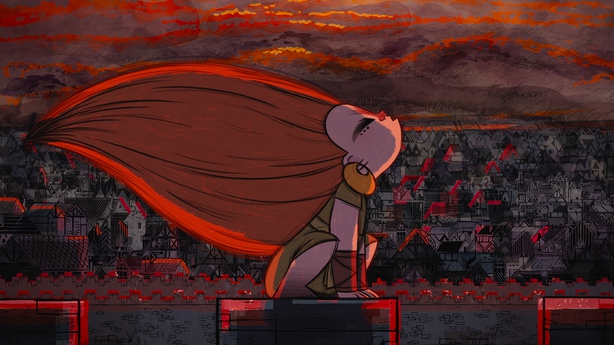 Tomm Moore, who also directed the stunning animation, said that it is "lovely" to be recognised.

"It's lovely. For the third one in the trilogy that we've been working on to be recognised, it's just great.

"I know there is stiff competition out there but we'll give it a lash."

Wolfwalkers is up against Onward, Over the Moon, A Shaun the Sheep Movie: Farmageddon, and Soul.

It was made by Kilkenny's Cartoon Saloon and Luxembourg's Melusine Productions.

Fís Éireann/Screen Ireland, the Broadcasting Authority of Ireland (BAI) and RTÉ all participated in its production.

As expected, Chadwick Boseman has received a posthumous nomination in the best acting category, for his performance as an ambitious trumpeter in Ma Rainey's Black Bottom.

Boseman will be up against Riz Ahmed (Sound of Metal), Gary Oldman (Mank), Anthony Hopkins (The Father) and Steven Yeun (Minari).

The Best Picture nominations went to The Father, Judas and the Black Messiah, Mank, Minari, Nomadland, Promising Young Woman, Sound of Metal and The Trial of the Chicago 7.

Two women were nominated for best director for the first time ever with Chloé Zhao (Nomadland) and Emerald Fennell (Promising Young Woman). Theuy\'ll be up against Thomas Vinterberg (Another Round),  David Fincher (Mank), Lee Isaac Chung (Minari).

In the Actor in a Supporting Role category, Daniel Kaluuya and LaKeith Stanfield both received nominations for their role in Judas And The Black Messiah.

Also nominated were Sacha Baron Cohen (The Trial of The Chicago 7), Leslie Odom Jr (One Night In Miami) and Paul Raci (Sound of Metal).