The 78th Golden Globes was hosted by Tina Fey and Amy Poehler, returning for the fourth time, after hosting in 2013, 2014, and 2015. Here's how the ceremony unfolded.

Fey and Poehler shared duties from their respective cities, with Fey live from New York's Rainbow Room, with Poehler based at the Beverly Hilton, in Beverly Hills, and nominees at various locations around the world.

The Frances McDormand-starring Nomadland picked up its second award of the night - and the Golden Globe's most prestigious - when it was announced as the winner in the Best Motion Picture - Drama category. 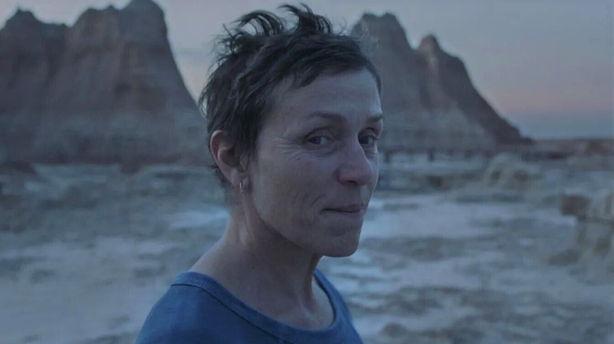 For her role as the legendary singer, Andra Day has won the Golden Globe award in the Best Performance by an Actress in a Motion Picture - Drama for her performance in The United States vs Billie Holiday.

Sacha Baron Cohen makes it two wins in a row for Borat Subsequent Moviefilm as he picks up the gong for Best Performance by an Actor in a Motion Picture - Musical or Comedy.

"Thank you to the all-white Hollywood foreign press," the film's star said.

He also poked fun at Rudy Giuliani, Donald Trump’s lawyer who had a headline-grabbing cameo in Borat, before paying tribute to his co-star Maria Bakalova.

And Cohen praised the crew of the film for putting themselves in danger while shooting undercover amid the pandemic.

He said: "They did that because we all believed so deeply in releasing this movie before the election to show the danger from lies, hate and conspiracies, and the power of truth, empathy and democracy."

He also thanked his wife, Isla Fisher, who was seated next to him.

And it's a win for Borat Subsequent Moviefilm as it lands the Best Motion Picture - Musical or Comedy award.

This year's Best Director - Motion Picture award has gone to Nomadland's  Chloé Zhao. It makes her the first female winner in that category.

The late Chadwick Boseman has been posthumously awarded the Best Performance by an Actor in a Motion Picture - Drama gong for his performance in Ma Rainey's Black Bottom. Shortly after Anya Taylor-Joy's win, The Queen's Gambit adds another prize, this time for Best Television Limited Series, Anthology Series, or Motion Picture Made for Television.

And it's another gong for Canadian comedy Schitt's Creek as it picks up the award for Best Television Series, Musical or Comedy.

The Best Performance by an Actress in a Limited Series, Anthology Series or a Motion Picture Made for Television award goes to Anya Taylor-Joy, for her role in The Queen's Gambit.

She said: "I would do this project again and again and again. I'm so grateful and thank you the audiences that have watched and supported the characters."

Gillian Anderson makes it a fourth Golden Globe win for The Crown as she lands the award for Best Performance by an Actress in a Television Supporting Role.

She thanked the series creator Peter Morgan, who is her former partner, twice in her speech, both for "imagining I could inhabit Mrs T" and for "writing an exquisitely multi-dimensional character".

Jodie Foster wins Best Performance by an Actress in a Supporting Role in any Motion Picture for her role in The Mauritanian.

It's a hat-trick of wins for The Crown as it adds the Best Television Series - Drama award to add to Josh O'Connor and Emma Corrin's earlier successes.

Peter Morgan, the show's creator, thanked the HFPA and Netflix.

He said: "I’m just sorry I’m sitting here in my tragic little office and not surrounded by the people who make the show such a pleasure to make."

Morgan said he missed being with his fellow nominees and described the Golden Globes as the most fun awards show.

And its a second win on the night for The Crown as Josh O'Connor lands the award for Best Performance by an Actor in a Television Series - Drama.

"That's quite a surprise," O'Connor said, before he thanked the cast and crew of The Crown and said he had the "time of my life" working on the show.

He said: "To our incredible cast, every day working with you was a masterclass."

And addressing his co-star and fellow Golden Globe winner Emma Corrin, he said: "You’re extraordinarily talented, funny and a brilliant player of rock, paper, scissors. I love you to bits."

The award for Best Performance by an Actress in a Motion Picture - Musical or Comedy went to Rosamund Pike for her role in I Care a Lot.

She said: "I do care a lot, thank you for recognising the dark side of comedy."

Addressing her fellow nominees, including Borat Subsequent Moviefilm star Maria Bakalova, she said: "In my movie i had to swim up from a sinking car, I think I  would rather do that than be in a room with Rudy Giuliani, I salute your bravery."

And it's another win for Schitt's Creek, following on from Catherine O'Hara's earlier success, the show wins the Best Television Series - Musical or Comedy category.

Jason Sudeikis wins the Best Performance by an Actor in a Television Series - Musical or Comedy, for his performances in Ted Lasso.

"That's nuts," Sudeikis said, before he thanked the HFPA.

Soul picks up its second award of the night as it wins the Golden Globe in the best original score category.

The award for the Best Original Song, Motion Picture goes to Io Sì (Seen) from The Life Ahead.

The award for Best Performance by an Actress in a Television Series, Drama, goes to Emma Corrin, for her role as Diana Spencer in The Crown.

She said: "Thank you so much to Diana, you have taught me compassion and empathy beyond anything I could ever imagine."

Aaron Sorkin - the writer of The Trial of the Chicago Seven - picks up award in the original script category.

Mark Ruffalo wins Best Performance by an Actor in a Limited Series for I Know This Much Is True.

No luck for the Irish in the Best Animated Movie category as Cartoon Saloon's Wolfwalkers loses out as this year's Golden Globe goes to Pixar's Soul.

Absolutely no surprise as the Best Performance by an Actress in a Television Series, Musical or Comedy goes to Catherine O'Hara (below) in Schitt’s Creek.

She said she was "happily and seriously indebted to Daniel and Eugene Levy, they created a beautiful inspiring family love story where they let me wear a hundred wigs."

O'Hara said making the show was "an experience I will forever hold dear to my heart."

Her husband jokingly played music to wrap up her speech as she said: "I hope my family in lockdown might have brought some comfort to yours." 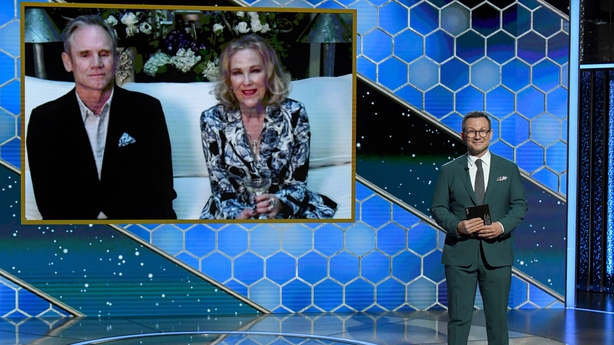 Brendan Gleeson misses out as the Best Actor in a supporting role on TV goes to John Boyega for his role in Small Axe.

The first winner on the night: the Best Performance by an Actor in a Supporting Role in any Motion Picture award goes to Daniel Kaluuya, for his role in Judas and the Black Messiah.

Viewers were initially left in the dark over what he said in his acceptance speech, with technical issues leaving the actor without sound.

"You're doing me dirty," the British star said when he eventually returned.

He thanked his family and said, "it takes a village to raise a film" and praised director Shaka King, as well as the production team behind the film and his co-stars.

In addition to the category winners, the 2021 Golden Globes honoured acting icon, Jane Fonda, with the Cecil B DeMille Award, and TV writer/producer Norman Lear with the Carol Burnett Award. 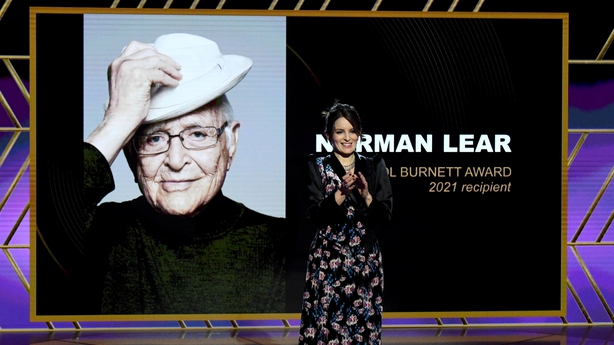 Lear is the third recipient of the recently created Carol Burnett Lifetime Achievement Award, which honours contributions to television.

The 83-year-old Fonda spoke of the importance of storytelling, saying powerful stories can "change our hearts and our minds."

Addressing Hollywood power players, she said: "Let's all of us make an effort to expand that tent so that everyone rises and everyone’s story has a chance to be seen and heard."

She added: "Let’s be leaders."