Bridgerton star Regé-Jean Page has poked fun at his new-found heartthrob status as he made his Saturday Night Live hosting debut. 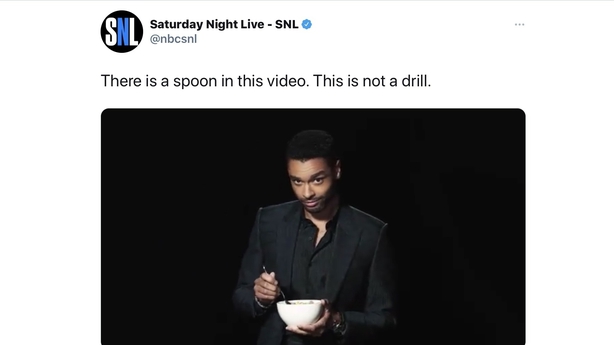 The British-Zimbabwean actor, 31, shot to fame in December after playing the dashing Duke of Hastings in Netflix's raunchy period drama.

As well as an army of fans, the role has earned Page a Screen Actors Guild Award nomination.

Page opened the episode with a joke about risque Bridgerton, describing it as "the show that made everyone turn to their mums and say 'you know what, never mind, I don’t think we should watch this together.'"

Page said fans may associate him with his "smouldering, sensual" character, before insisting "I’m just a regular guy."

He was then interrupted by SNL stars Aidy Bryant and Ego Nwodim, pretending to swoon over him.

"I have been getting a lot of this energy lately," Page said. "But you can both relax – I am nothing like my character the Duke. I’m actually quite shy."

That prompted a blast of romantic music as Page smouldered down the camera.

After more swooning from Bryant and Nwodim, Page again insisted he and the Duke are completely separate.

He said: "Ladies, I hate to break it to you but I am actually just kind of a nerd. I nerd out on music, I sing silly little songs."

Page then broke out into a cover of love song Unchained Melody, before SNL’s Chloe Fineman arrived dressed as Daphne, his Bridgerton love interest.

After more female attention, Page pointed to his other career highlights.

He said: "I’m happy to play the Duke, I’ve been around for a while though. I was in Roots, I’ve played high-flying lawyers. Yet somehow, people just want me to be this guy who says ‘I burn for you.'"

And wrapping up his monologue, Page praised Bridgerton’s diverse cast.

He said: "I am genuinely so happy this show has connected with so many people during lockdown. Especially people who don’t normally get to see themselves as romantic leads on television."

One of the first sketches Page starred in was about the popularity of Olivia Rodrigo’s number one smash hit song Drivers License.

In a sketch inspired by the sea shanties trend on TikTok, Page played the eccentric captain of a whaling ship, while Puerto Rican rapper Bad Bunny – the episode’s musical guest – starred as the inept navigator.

Another brought Fineman back as Daphne as SNL poked fun at Bridgerton’s sex scenes.

SNL’s cold open was inspired by the renewed interest in Britney Spears following an acclaimed documentary about the pop star’s rise and fall.