The Weeknd said he plans to tone down his often graphic performance style for the Super Bowl half-time show and admits he wants "to be respectful to the viewers at home".

The R&B superstar said he has created a concert that was "PG for the families" while still featuring his usual dramatic visual concepts.

The Canadian artist, real name Abel Tesfaye, who plays his only Irish show this year on October 13th at Belfast's SSE Arena, has incorporated blood and violence into his recent music videos as a comment on fame and celebrity culture.

Speaking during a press conference ahead of the show this weekend, he was asked whether he planned to "tone down" his style for the "family event".

"Yeah, for sure. I definitely want to be respectful to the viewers at home," he said.

"The story will continue but definitely we will keep it PG for the families. Definitely. I will try my best." 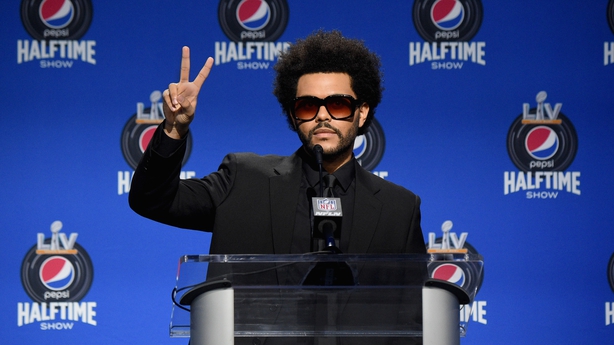 The star said he had been watching Diana Ross' half-time show in 1996 at the Sun Devil Stadium in Tempe, Arizona, in preparation for the big day, as well as similar performances by Michael Jackson, Prince and Beyonce.

"I don’t know what technically the greatest is but my favourite is definitely Diana Ross 1996. She is just so glamorous and the show just makes me smile," he said.

"She has a great exit with the helicopter, when she lands in the middle of the field, grabs on to it and flies out into the clouds. I wish I could have done that. I wish I had thought of it to be honest."

The Weeknd follows in the recent footsteps of Shakira and Jennifer Lopez, Lady Gaga, Coldplay and Katy Perry in filling the coveted slot.

The performance will take place on February 7 at the Raymond James Stadium in Tampa, Florida.

The Weeknd is bringing his After Hours World Tour The SSE Arena in Belfast on 13 October 2022. Tickets go on sale on Monday, February 8 at 9am.