It is reported that Katie Price's disabled son Harvey is moving to a residential college to help him to lead a more independent life.

Harvey, who is 18, was born with the genetic disorders Septo Optic Dysplasia and Prader-Willi syndrome. He is autistic, partially blind and has learning and behavioural difficulties.

In an interview with The Sun, model and author Price said that "when he goes to college, he will learn to be an adult".

"It breaks my heart," she told the tabloid. "I don't want him to think I'm just getting rid of him.

"This is his chance to live an independent life, learn skills and socialise with people other than me."

"I'm trying to get him used to me not being there all the time," Price continued. "But he'll call on his iPad and say, 'Mum, I need you', and I run to him.

"When he's three hours away, it will break my heart, because I won't be able to get there as I've got to juggle him with my other kids."

A documentary about Price's experience bringing up Harvey as a single parent is due to air on BBC One on Monday, January 25 at 8:30pm.

When the documentary was announced, Price said: "Being a parent of a child with complex needs, as Harvey has, presents daily challenges. Simple day-to-day things that other people take for granted can take all day.

"Every day presents a new challenge, no two days are the same. We have learnt and grown together, and together we have built our private world, a bond between mother and son which goes deeper than most - we are unbreakable."

"Harvey has taken on every hurdle life has thrown at him - from birth, being told he would never see, to now drawing rainbows - he was told he would never be able to engage in everyday life, but is often the life and soul of the party," Price continued. "Harvey touches the hearts of all those he meets - his heart knows no bounds when giving out love and affection.

"Now he is 18, I have to start making vital decisions that will impact Harvey's future that are different for most other parents. Harvey isn't about to go to uni, travel the world on a gap year, or take his driving test. Harvey's never even had a beer!

"Harvey is now an adult, and this is the most important time of his life, making the vital decisions, safeguarding his future and ensuring he has the tools for life that will give him the equal rights to live his life to the fullest."

"For the first time I will be taking you behind the closed doors of mine and Harvey's world," Price concluded. "Experience a day-in-the-life and what the future will look like for him and me." 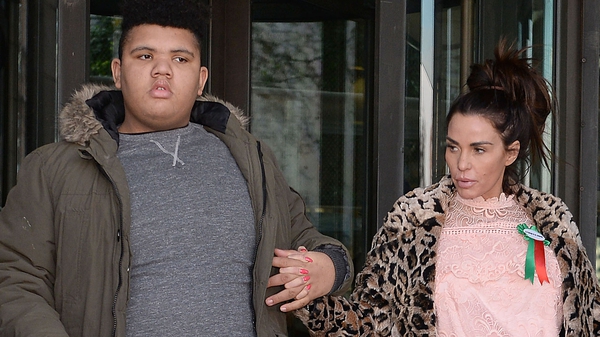