Actor Chuck Norris has denied that he attended a pro-Donald Trump rally in Washington DC last week that ended with the death of five people after pictures emerged online of a lookalike of the movie action hero.

After shots of Norris's "doppelganger" turned up on social media following the Stop the Steal march turned into an assault on the US Capitol in an attempted coup, tweets circulated on Twitter suggesting the American actor, 80, was present.

However, the actor's agent Erik Kritzer has issued a statement confirming that Norris, star of such gung-ho films as Missing in Action and Invasion U.S.A., was not there, and the pictures were of a lookalike posing for shots with fans.

"Chuck remains on his range in Texas where he has been with his family." Kritzer said, adding jokingly that the actor is "more handsome".

I recently learned there was a Chuck Norris lookalike at the DC Capitol riots. It wasn't me and I wasn’t there. There is no room for violence of any kind in our society. I am and always will be for Law and Order.

Posting on Twitter, Norris, a well-known conservative who has voiced his support for Trump, said, "It has come to my attention that unfortunately there was a Chuck Norris lookalike at the DC Capitol riots on January 6th. It wasn't me and I wasn't there.

"Let me be clear that there is no room for violence of any kind in our society, including in the context of political protests and that a peaceful transition of power is fundamental to our democratic system of government. I am and always will be for Law and Order.

Speculation mounted online after the picture was uploaded to Instagram by a man who attended the march, with the actor's name as the caption.

The photo went viral, leading to debate about whether it was indeed Norris, or just a lookalike.

A tweet, posted by @NunesDrag, said, "Wait, so are we just not going to mention the fact that Chuck Norris was at the MAGA insurrection?"

The snap divided fans, with one tweeting, "I don't believe it's him. I've seen pictures of the Chuck Norris guy at Trump rallies before. I think it's just someone with an uncanny resemblance." 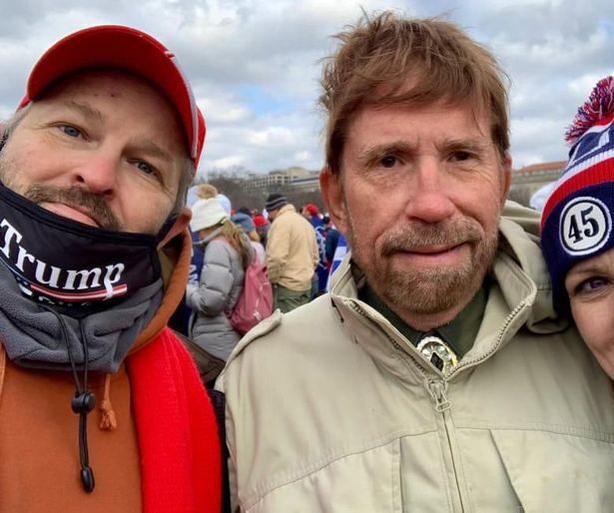 "#MAGATerrorist Rally in Washington, I don't believe it. Chuck look-alikes go back decades. There are lots of Republicans who aren't #TrumpCult," a third commented.

However, many were convinced that Norris and not his lookalike was indeed present.

"We should all be used to our idols growing up disappointing us!! But, seriously, come on, how can anyone be surprised that Chuck Norris was a Trump supporter," said one commentator.

A second added, "Are you serious? Chuck Norris is a Trump Supporter? I can't say I’m surprised, but ya know since he’s Chuck Norris did he walk through the walls of The Capital Building?"