Lockdowns, working from home and remote learning due to the pandemic saw changes in viewing habits, with RTÉ's all-day share of viewing increasing by 7% to 27.2% for all channels, and a share increase of 12% among 15 to 34-year-olds.

According to newly released TAM ratings figures, The Late Late Toy Show once again topped Ireland's ratings with an average of 1.7million viewers. 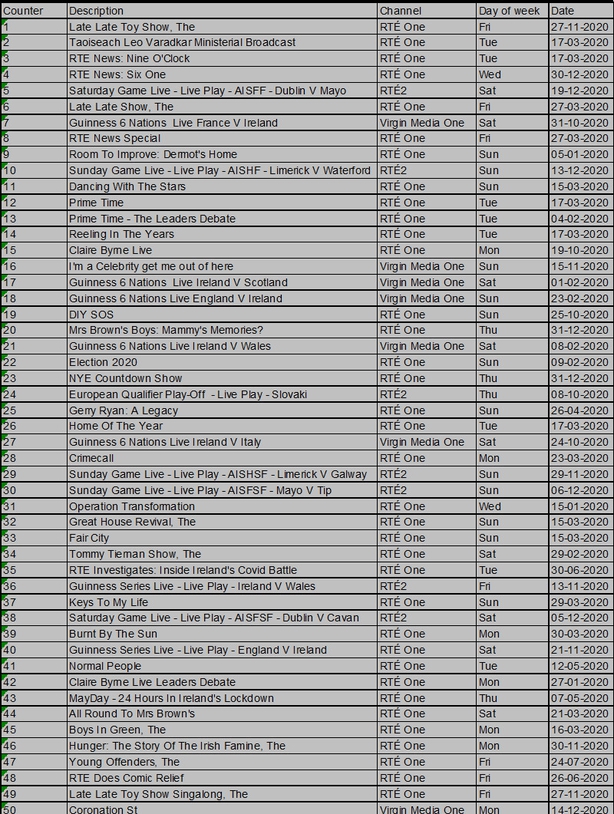 The second most-watched programme in 2020 was the then Taoiseach Leo Varadkar's Covid-19 broadcast on St. Patricks Day, which was watched 1.6million viewers.

News and Current Affairs featured strongly in the most-watched programmes of 2020 and a range of RTÉ News bulletins, as well as Prime Time, Claire Byrne Live, RTÉ Investigates and coverage of the 2020 General Election, all featured in the Top 20.

Sport continued to entertain us, albeit from our armchairs rather than the stands. The All-Ireland Senior Hurling and Football Finals on RTÉ drew huge audiences and ranked in the Top 10 most-watched programmes last year.

2020 was also a good year for home-grown programming. The most-watched shows included Room to Improve’s Dermot’s Home episode, which was watched by 776,600 people.

Also featuring in the top 50 most watched shows of the year were DIY SOS and The Great House Revival, while the documentary Gerry Ryan, A Legacy was watched by 568,200 last April.

Dancing with the Stars, Operation Transformation and The Young Offenders all feature in the Top 50 most-watched programmes of 2020.

Shine Your Light, a series of national moments of togetherness organised by RTÉ, with millions of people across the country participating by shining a light in their windows, at their doorsteps or within their communities to mark important milestones for the nation, was also a hit.

For young adults (15 to 34), RTÉ had eight of the Top 10 programmes with RTÉ News and Current Affairs and RTÉ Sport featured strongly in their viewing preferences. However, the top show amongst this audience was The Late Late Toy Show.

Official TAM Ireland/Nielsen figures for 2020 also show that television occupied much of our leisure time, with the average person in a TV home watching two hours and 40 mins of TV every day, an increase of 1% on 2019.

The RTÉ Player proved popular last year, with viewing up by 36%. Normal People topped the polls with 818,000 streams for the top episode out of a total of five million streams of the series, which was a global hit.

Unsurprisingly, The Late Late Toy Show was the second most-watched show on RTÉ Player with 575,000 streams.

Speaking about the new figures, Adrian Lynch, Director of RTÉ Audiences, Channels and Marketing said: "Looking at the Top 50 programmes, it’s clear that Irish stories and content are the programmes that bring people together proving that live programmes, big events and home-produced content are hugely popular.

"2020 was the year that pushed us to our limits as a nation, when we had to stay apart in order to pull together.

"But throughout this exceptionally difficult year, RTÉ provided variety across all channels as Ireland’s public service media, informing, entertaining and educating audiences of all ages and uniting the nation in those key moments - both the highs and the lows - that will stay with us for a long time."