CNN journalist Donie O'Sullivan, from Cahersiveen in Kerry, has said he is "overwhelmed" by the support and kind messages from back home following his coverage of the US Capitol riot on Wednesday.

O'Sullivan, who has been with CNN since 2016, found himself trending on Twitter in Ireland following his calm presence and articulate reporting of the Washington violence earlier this week. 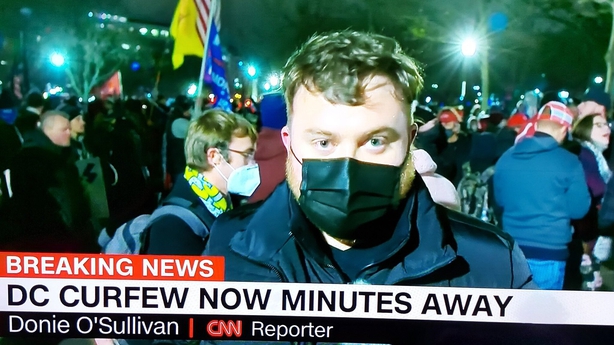 Speaking on Friday's Late Late Show on RTÉ One, the social media sensation said the support shown to him this week has made him "feel much closer to home".

"It's just been unbelievable. I've been totally overwhelmed.

"I think people have seen me probably on Harcourt Street not being so coherent and eloquent," he laughed.

He added: "It's been surreal. This was my first Christmas away from Ireland...This experience this week has made me feel much closer to home for sure."

Everyone's new favourite Kerryman @donie tells Ryan about his new-found twitter fame and how he went from Cahersiveen to @CNN.#LateLate pic.twitter.com/KnDVcc9nMq

O'Sullivan, who previously worked as a journalist for Storyful in New York and Dublin, joked about how his colleagues at CNN struggled to understand his dad's accent following his parents' TV appearance in which they understandably praised their son.

"A reporter from TG4 turned up at their door yesterday unannounced and they sort of rolled with it," he explained.

"I've had a lot of questions from my colleagues here at CNN about what the hell my dad is saying. He has a very strong Kerry accent.

"I told them that my mam Noreen, who was born and raised in Boston, doesn't understand him half the time and that's why they've had such a successful marriage."

Meet Donie's @CNN mom and dad from Cahersiveen.
Lovely warm people and so proud of their son. @donie pic.twitter.com/x5V69u258W

You can catch the full interview with Donie on the RTÉ Player.