Today's TV tips include Billy Keane’s exploration of The Real Field, a look at the career of Moya Brennan, and Niall Delamere’s review of the year, 2020: Thank You, Next!

John B Keane’s son, the broadcaster and writer Billy Keane, goes in search of the truth behind the murder that inspired his father’s most famous work.

John B wrote his seminal play The Field after being inspired by a dispute between two farmers over bog land in rural Kerry, and it was first staged in 1965.

With The Field often on the exams curriculum, there are very few Irish people who haven’t seen a production of the play or Jim Sheridan’s film adaptation. But there are many who don’t know the reality behind the the story.

This is a new film that captures some of the country's top musicians performing at some of Ireland's most spectacular locations, including Denise Chaila and Sharon Shannon at the Cliffs of Moher, and Clannad performing in Poison Glen, Gweedore.

Producer/director Donal Scannell explains: "The programme was conceived in May out of a conversation with Temple Bar Tradfest.

"They started this whole ball rolling because they wanted to showcase Irish musicians abroad. They knew Irish artists couldn’t tour and wanted to find a way to open new avenues for them.

"When the whole world was shrinking its outlook, Tradfest went bigger. As everything else shut down, they opened up a new world of possibility."

2020 marked 50 years in the music business for the first lady of Celtic music, Moya Brennan and the scope of her success as a performer is staggering.

As a solo artist, she has won an Emmy, been nominated for two Grammys, performed for presidents and popes. As a member of Clannad, she recorded 17 albums, won a Grammy, a BAFTA and an Ivor Novello Award.

She has collaborated with everyone from Bono to Bruce Hornsby and the Theme from Harry’s Game remains the only Irish language song to make the UK top ten.

In this deeply personal documentary, Moya looks back on her career. Featuring exclusive interviews and performances with Moya and her family as well as contributions from the cream of Irish musical talent, including Paul Brady, Imelda May, Damien Dempsey, Liam Ó Maonlaí, Mairéad Ní Mhaonaigh and many others.

This is the time of year when the TV schedules get filled up with various specials looking back on the year - and 2020 certainly had a lot more going on than most.

Here, comedian Neil Delamere takes a comic look back at the past year, taking in the mayhem of Brexit, Megxit, bushfires, killer wasps, lockdowns, golfgate and the benefits of bleach-drinking.

Spoiler alert: there may be the odd reference to the pandemic. And Donald Trump (below). 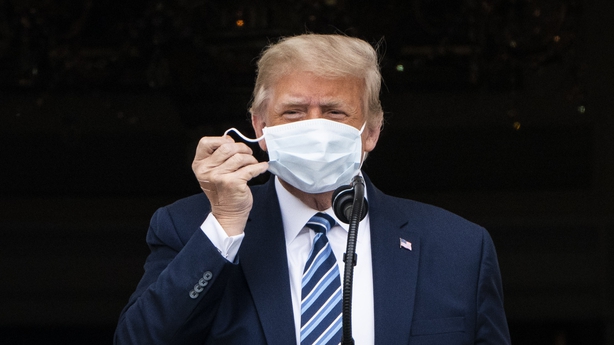 Neil is joined by Dermot Whelan, Muireann O'Connell, Andrew Maxwell and Alison Spittle to find the funny in the year we can’t wait to forget.

Here’s a four-part series charting the explosion in celebrity culture over the last two decades.

The world of celebrity has been transformed since the turn of the century, driven by some of the most dramatic technological and cultural developments in recent times.

Today, celebrity is certainly a key currency, but fame can also come at a huge cost.

The turn of the century heralded the dawn of reality TV powerhouses like Big Brother and Pop Idol – TV formats which would prove so popular that they would dominate viewing habits for decades to come.