This weekend we talk to Nicola Coughlan of Derry Girls fame and we take a look back on some of the biggest interviews on the show over the last twelve months including Miley Cyrus and Sam Smith!

The last time I spoke with Nicola Coughlan was on the green carpet of the Oscar Wilde awards ahead of the Oscars back in February. While the world wasn't aware of what was ahead of it, it was aware that Nicola would be starring in Shonda Rhimes' new period drama with a twist Bridgerton. Narrated by Julia Andrews and starring a massive ensemble cast, Bridgerton tells the story of Daphne Bridgerton, the eldest daughter of the powerful Bridgerton family as she makes her debut onto Regency London’s competitive marriage market. But where does Coughlan’s Penelope find herself in the world?

"She is a member of London’s high society. She, she's a young girl and its her first year out in the world of, you know, being presented to the queen, being in the marriage market. And she is sort of terrified and is quite shy and doesn't really want it to be part of it." 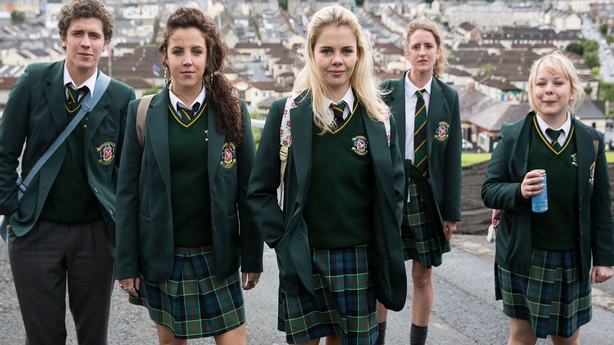 Nicola made her name playing Clare on the the smash hit series Derry Girls. The show is set to take on a third season so it’s no surprise that the the cast are open about how they consider themselves more like family.

Speaking about the challenges of joining a brand new ensemble and the nerves that go with it Nicola had this to say:

"Going into this it'll was you always have that first day at school feeling, you know, when you go to film something new and you go in and you're like, you want to make sure that they did mean to hire you and you're not going to get fired. I don’t think that fear ever leaves you."

The scale of the production is massive with Shondaland utilising some of the UK’s most breathtaking locations to bring the 19th century back to life. Primarily shot in Bath and Somerset with interiors in London, I can only imagine it was very easy for the actors to trick their brains into time travelling. The costumes are all handmade bringing the glamour and class to the small screen tenfold.

Speaking of the experience Nicola told me she couldn’t believe what she was seeing everyday on set.

"We got to travel to these beautiful places, these big grand stately homes, mansions, and these really ancient buildings. And you think, hang on these fancy balls really happened here. We are following the footsteps of these people and their mad feathers and their bows they wore. I mean, the costumes are all made from scratch!"

While we look forward to Bridgerton on Netflix December 25th, on the show this weekend we are starting to look back on some of the biggest interviews we have had in the last year.

Eh... IT'S ONLY @MileyCyrus chatting to @stephenbyrne ??

Stephen gets the lowdown on THAT @The_Cranberries 'Zombie' cover and so much more.

Catch the full chat on air after 3pm ?? pic.twitter.com/iND12p9XFy

Little did I think I would be welcoming some of the biggest stars in the world into my bedroom! Just recently I spoke with Miley Cyrus all about her brand new album Plastic Hearts. I am a massive fan of Miley and have been for a number of years. She is one of those artists that just seem to be able to change their sound and style album to album in a way that feels natural not forced or erratic.

Talking about how that comes about and whether she ever takes prolonged breaks away from working the answer was what we all expected.

"Relaxing is really not a part of my lifestyle choices. I'm pretty intense all the time. I immediately, as soon as I put out one record, want to start making the next one."

Miley caught the attention of everyone including The Cranberries when she took on their iconic song Zombie at the Save Our Stages benefit gig in America. Its very hard to cover something this country loves so much and pass the test but the reaction meant to the world to her, so much so that the song even became an album track on Plastic Hearts. She spoke to me about why she chose to cover it at this time in history.

You can stream Plastic Hearts right now and join us this weekend with Nicola Coughlan, Miley Cyrus, Sam Smith, The Streets and many more!

The Stephen Byrne Show on RTÉ 2fm, Saturday and Sunday from 3pm.