Comedian Ricky Gervais admits that he felt "guilty and ashamed" following the arrival of his first pay cheque as royalties for sales of The Office DVD.

In a new podcast, Ricky reveals that he detests being called a celebrity and the term embarrassed him because of his working-class roots.

He acknowledges that he is a famous person, and, moreover, one who is famous for something, rather than being a celebrity, which he reckons, is 'vacuous.'

The 59-year-old comedian's financial worth is estimated at £97.5 million (€107,460,600) following a series of hugely successful TV shows, including The Office, Derek and After Life. He readily admits that he has difficulty with such sums in his bank balance. 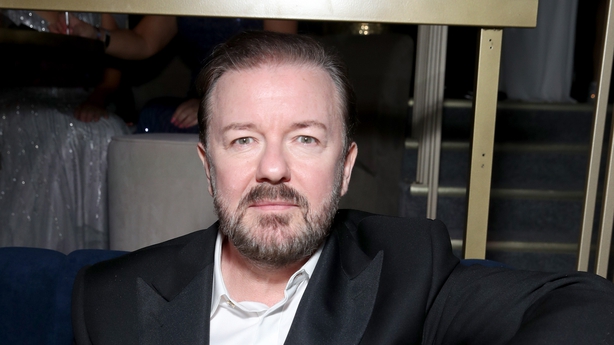 "I remember when I was sort of newly-famous, you know, the cheque came through for The Office DVD," says Gervais. "I remember it was like more than my dad used to earn in a year, and for a split second it ruined it for me.

"I thought, 'Ah, that's not why I did this’... I got over it… but it’s odd because you do go through all those things and look back."

"It’s a working class thing, you look around and go, ‘I can’t quite enjoy this.’"

His charitable donations means he can "sleep at night," but he prefers to say little or nothing about that aspect of his financial life.

"It’s hard to juggle, whether it’s showing-off or virtue signalling but you can help this charity, so I just do it when I can.

"We even let people be privileged as long as they say, 'I know I'm privileged, but I'm nothing really', we don’t like people to go, ‘I deserve it!’

Such people believe their own hype, the actor and comedian argues, and "we want to bring them down a peg or two and I think that's totally natural."

Gervais despises actors and singers for "virtue signalling" and telling people how they should lead their lives. He speaks of the hypocrisy of such individuals, who through mere 'luck' were "paid 100,000 times the wages of a nurse… more than someone who actually saves lives."